Arthur C. Clarke well described a space elevator in his novel The Fountains of Paradise:


In the very decade that the first satellite was launched ... one daring Russian engineer conceived a system that would make the rocket obsolete. It was years before anyone took Yuri Artsutanov seriously. ...

Go out of doors any clear night and you will see that commonplace wonder of our age — the stars that never rise or set, but are fixed motionless in the sky. We ... have long taken for granted the synchronous satellites ... which move about the equator at the same speed as the turning earth, and so hang foerever above the same spot.

The question Artsutanov asked himself had the childlike brilliance of true genius. A merely clever man could never have thought of it — or would have dismissed it instantly as absurd.

If the laws of celestial mechanics make it possible for an object to stay fixed in the sky, might it not be possible to lower a cable down to the surface, and so to establish an elevator system linking earth to space?

When you build a bridge, you start from the two ends and meet in the middle. With the Orbital tower, it would be the exact opposite. You have to build upward and downward simultaneously from the synchronous satellite, according to a careful program. The trick is to keep the structure's center of gravity always balanced at the stationary point. If you don't, it will move into the wrong orbit, and start drifting slowly around the earth.

What is the altitude of a stationary orbit? Speed  of a circular orbit is (Gm/r)1/2. Speed is also ωr, where ω is angular velocity in radians. For a geostationary orbit, ω would be 2 pi radians/sidereal day. Using these two equations we can find radius of a body's stationary orbit:

Altitude of the stationary orbit is the orbit's radius minus the body's radius.


Vesta has a low stationary orbit because of it's low mass and high ω.

There are two accelerations at play: gravity and inertia in a rotating frame (the so-called centrifugal force).

Centrifugal acceleration is ω2r and gravity is Gm/r2. We can choose our units so that Gm as well as ω are 1. Then the acceleration gradient can be graphed like this: 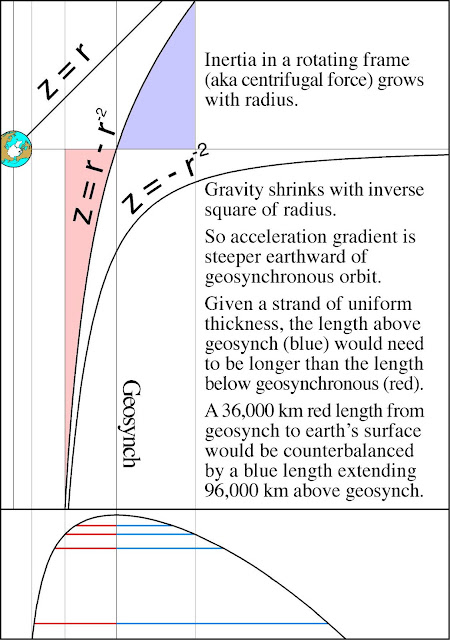 A friend pointed out "But why assume a uniform strand? The part near synch has the most tension, and so is thickest in most designs,"  Thickened portions can be modeled as several strands. Each strand would need to be asymmetrical to balance.

Ratio of tether thickness at stationary altitude to thickness at planet surface is called the taper ratio. Taper ratio varies depending on Gm, ω as well as tensile strength and density of tether material. This Wikipedia chart gives tensile strength and density of various materials. Equations from this The physics of the space elevator by P. K. Aravind can be used to find altitude of the elevator top as well as taper ratios.

These numbers come from equations on pages 133 to 138 of Szebehely's "Theory of Orbits - The Restricted 3 Body Problem".

With tide-locked moons, there are three accelerations: 1) gravity of central body, 2) inertia in a rotating frame (aka centrifugal force, 3) gravity of moon.

The angular velocity ω is 2 pi radians/moon's orbital period. We can set time unit as orbital period/(2*pi), length unit as moon's orbit radius, and mass unit as mass of central body. Then ω and Gm are 1 and the accelerations can be graphed like this: 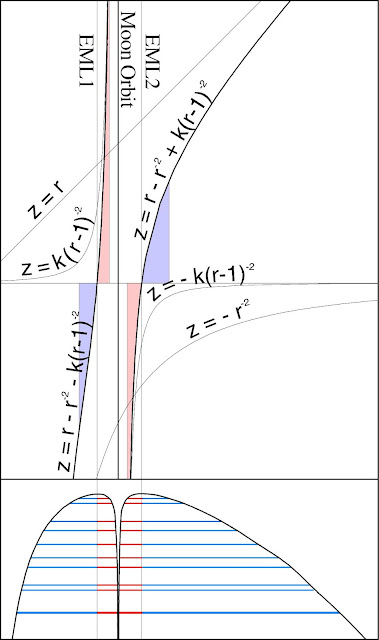 To counterbalance, the blue strands extending away from the moon must be longer than red strands dangling towards the moon. the asymmetry is even more pronounced on the EML2 beanstalk.

A length extending 234,000 kilometers from EML1 earthward would balance a 57,000 kilometer length from EML1 to the moon's surface. Liftport proposes a Lunar elevator somewhat like this. An 11 tonne Zylon tether would extend 264,000 km from the moon's surface earthward. That's a little shy of the length needed but their diagrams indicate a counterweight at the earthward tether end.

Here's a picture of the Liftport proposal:

Speed at apogees of red ellipses match ω * r. So virtually no delta V is needed for rendezvous with tether at apogee. The tether is within 3 km/s of Low Earth Orbit (LEO) and 1 km/s of Geosynchronous Earth Orbit (GEO).

Jerome Pearson et al have talked about lunar elevators. They point out a counterweight near EML1 has few newtons per kilograms, so a weight in that neighborhood would need to be quite massive. The chart on upper right of page 7 of this pdf indicates the counterweight mass at 60,000 km would be between 100 and 1000 times the tether mass. Here is a more detailed lunar elevator pdf by Pearson and friends.

At 1.08e16 kilograms, Phobos is a large momentum bank. A Phobos tether could catch or fling many payloads with little effect on its orbit.

Mars fans like to point out that Mars' shallow gravity well allows a beanstalk made of conventional materials like Kevlar. They suggest a Mars elevator could be a gateway to the resource rich Main Asteroid Belt. To sling payloads to Ceres, a Mars elevator would need to be at least 46,350 kilometers tall. Taper ratio for Kevlar would be 45.

In contrast a Phobos tether less than 14,000 km can fling stuff to Ceres. 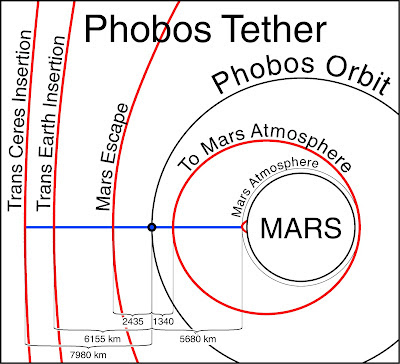 Kevlar taper for a Phobos tether is about 8, less than 1/5 of the Mars tether's taper.

Here is a graphic comparing taper and length of Phobos and Mars elevators capable of slinging payloads to Ceres:

A Phobos elevator accomplishes many of the same goals for a small fraction of the materials. It doesn't descend to Mars' surface, however. The Phobos tether foot is moving about .6 km/s wrt Mars' surface. So a small suborbital hop would be needed for a Mars ascent vehicle to rendezvous with the Phobos tether foot.  A Mars lander departing from the tether foot would need to shed .6 km/s, much less difficult than the typical 6 km/s.

Given a Phobos tether and a Deimos tether, it is possible to travel between the two moons with virtually no delta V. If a payload is released 937 kilometers above Phobos, it will follow an ellipse whose apo-aerion is 2942 kilometers below Deimos. At this apo-aerion, the payload is traveling the same speed as the Deimos tether at that altitude. 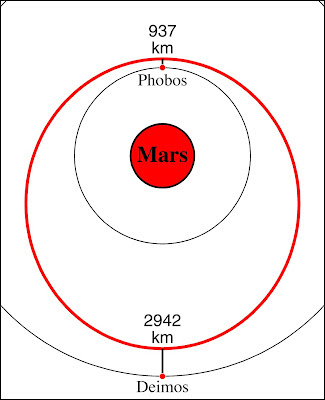 Given two co-planar tide-locked moons orbiting a planet, there can be similar transfer ellipses between tethers. I like to imagine a system of tide-locked moons about a gas giant using such tethers. The tethers would need to lie outside of the gas giant's rings, though. Else the debris flux from the ring would likely cut the beanstalk.


I'm not embracing elevators as the panacea that will open the cosmos. There are problems. Problems should be examined.

A Spaceward article The Space Elevator Feasibility Condition looks at throughput. Elevator cars and their cargo add to elevator mass but not tensile strength. So unless the cars are a tiny fraction of elevator mass, they'll boost the taper ratio. How fast can the elevator cars move? If their horse power comes from solar arrays on the car, they may move fairly slowly. The distances are huge, it could easily take a car months to climb to its destination.

Initially the space elevator material must be delivered with rockets. If the mass delivered by rockets is hundreds of times the mass an elevator can deliver in a year,

The Space Elevator Feasibility Condition notes that throughput might not be enough to even maintain an elevator.

The longer the elevator, the more serious the throughput problem. It'd be much less of an issue in the shorter elevators like the Phobos or Ceres elevator.

Orbital debris could sever an elevator. This is a big problem for an earth surface to GEO elevator. This elevator passes through LEO which has a high debris density and this debris is moving about 8 km/s with regard to the elevator.

Tether Experiments is a page listing various tether missions. One of the missions was SEDS-2, a 20 kilometer tether deployed "to see how long it would remain intact in the face of collisions with space dust and other orbital debris. ... it was cut after only four days"

The other elevators I've looked at occupy volumes with a lower debris density. And the orbital velocities are more leisurely so the debris flux is more tolerable. But even if an impact is a long shot, it's a concern if a very large investment is at risk.

This is mostly directed at the Lunar elevator. The Liftport elevator starts at EML1 and sends tether ends simultaneously moonward and earthward. A slight nudge from EML1 can send a mass along a chaotic orbit, sometimes wildly chaotic. Station keeping is important. During construction, this balancing act must be maintained while one end is traveling approximately 200,000 kilometers and the other end 60,000 kilometers. After the elevator is anchored to the lunar surface, this station keeping isn't necessary but it's unclear how long it will take for the anchor to reach the moon's surface. If the anchor impacts the lunar surface at near lunar escape velocity, it would likely vaporize. If the lunar anchor is lowered gently, the duration of the balancing act would be prolonged.

I'm not attacking these notions. Quite the contrary, I believe criticisms from a thoughtful Devil's Advocate can help a worthwhile idea more than cheer leading.