Potholes on the Interplanetary Superhighway.

Wikipedia describes the Interplanetary Transport Network as "… pathways through the Solar System that require very little energy for an object to follow." See this Wikipedia article. They also say "While they use very little energy, the transport can take a very long time."

Low energy paths that take a very long time? I often hear this parroted in space exploration forums and it always leaves me scratching my head. 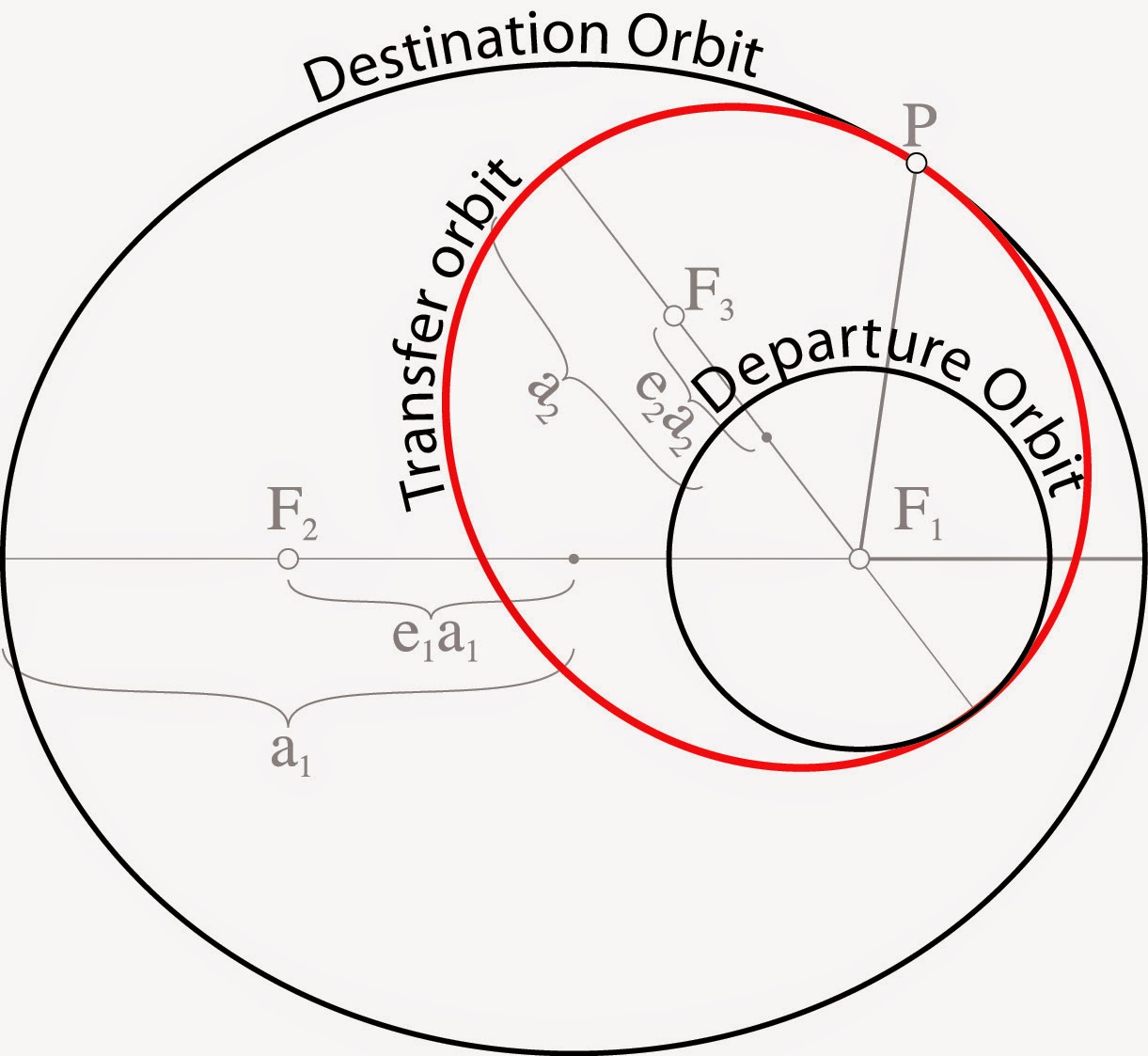 
In the case of Mars, a bitangential orbit is 8.5 months give or take a month or two. Is there a path that takes a lot longer and uses almost no energy? I know of no such path.

The interplanetary Superhighway supposedly relies on weak stability or weak instability boundaries between L1 and/or L2 regions. Here is an online text on 3 body Mechanics and their use in space mission design. The authors are Koon, Lo, Marsden and Ross. Shane Ross is one of the more prominent evangelists spreading the gospel of the Interplanetary Super Highway.

The focus of this online textbook is the L1 and L2 regions. From page 10:

Travel between these realms can be accomplished by weak stability or weak instability boundaries that emanate from L1 or L2. From page 11 of the same textbook: 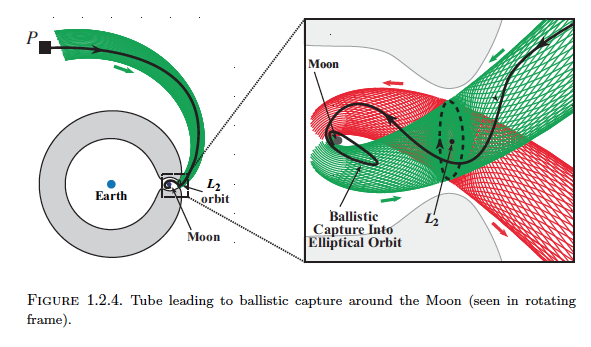 Since I'm a lazy typist that is what I'll use for the rest of this post.

I am very excited about the earth-moon Lagrange necks. They've been prominent in many of my blog posts. Here's a post entirely devoted to EML2.

It takes only a tiny nudge and send objects in these regions rolling about the slopes of the effective potential hills. Outside of the moon's influence they tend to fall into ordinary two body ellipses (for a short time).

Here's the ellipse an object moving at EML1 velocity and altitude would follow if the moon weren't there: 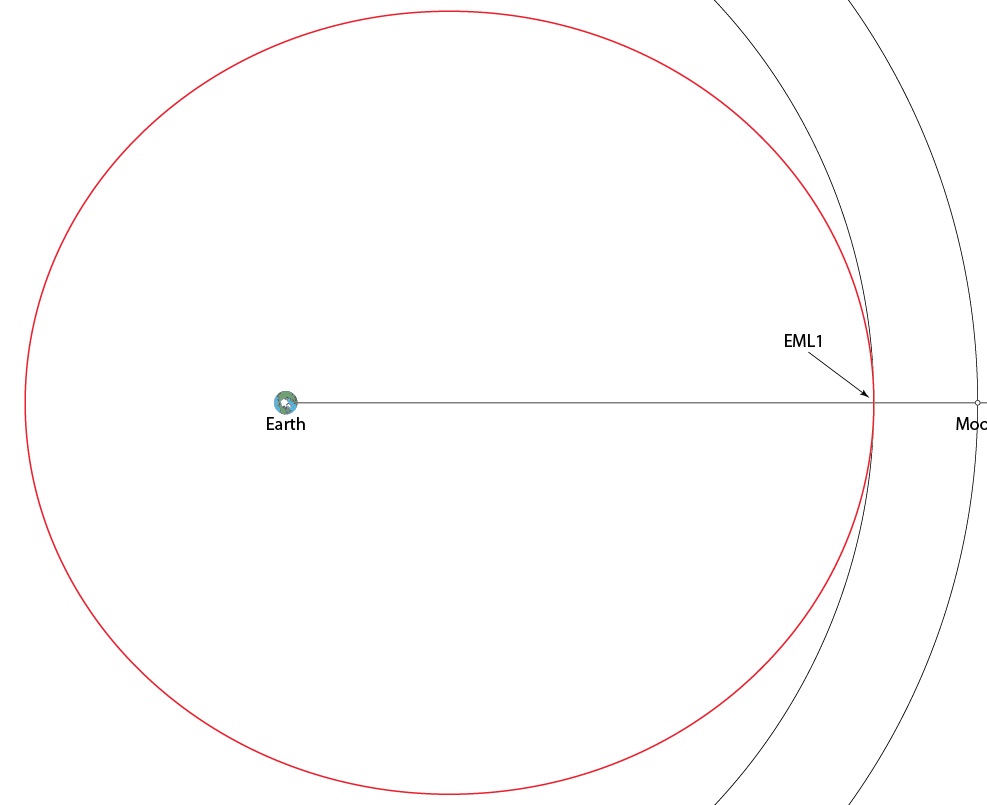 In practice an EML1 object nudged earthward will near the moon on the fifth apogee. If coming from behind, the moon's gravitational tug can slow the object which lowers perigee.

Here is an orbital sim where the moon's influence lowered perigee four times: 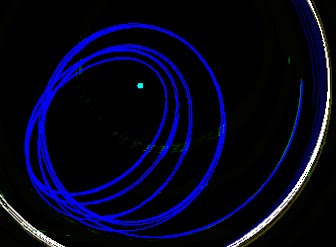 I've run sims where repeated lunar tugs have lowered perigees to atmosphere grazing perigees. Once perigee passes through the upper atmosphere, we can use aerobraking to circularize the orbit.

Orbits are time reversible. Could we use the lunar gravity assists to get from LEO to higher orbits? Unfortunately, aerobraking isn't time reversible. The atmosphere can't increase orbital speed to achieve a higher apogee. And low earth orbit has a substantially different Jacobi constant than those orbits dwelling closer to the borders of a Hill Sphere.

So to get to the lunar realm, we're stuck with the 3.1 km/s LEO burn needed to raise apogee. But once apogee is raised, many doors open.

There are low energy paths that lead from EML1 to EML2. EML2 is an exciting location. 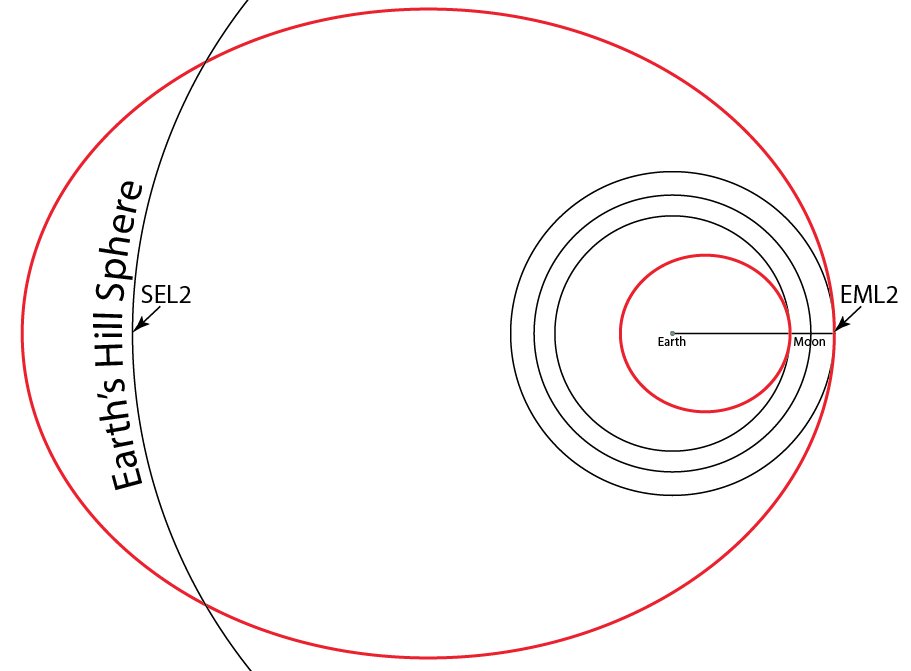 Without the moon's influence, an object at EML2's velocity and altitude
would fly to an 1,800,000 km apogee. This is outside of earth's Hill Sphere!


In the above illustration I have an apogee beyond SEL2. But by timing the release from EML2, we could aim for other regions of the Hill Sphere, including SEL1.

Here is a sim where slightly different nudges send payloads from EML2: 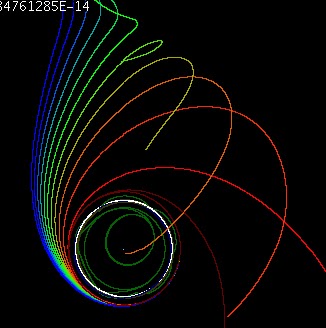 See how the sun bends the path as apogee nears the Hill Sphere? From EML2 there are a multitude of wildly different paths we can choose. In this illustration I like pellet #3 (orange). It has a very low perigee that is moving about 10.8 km/s. And it got to this perigee with just a tiny nudge from EML2. Pellet # 4 is on it's way to a retrograde earth orbit. Most of the other pellets are saying good bye to earth's Hill Sphere. 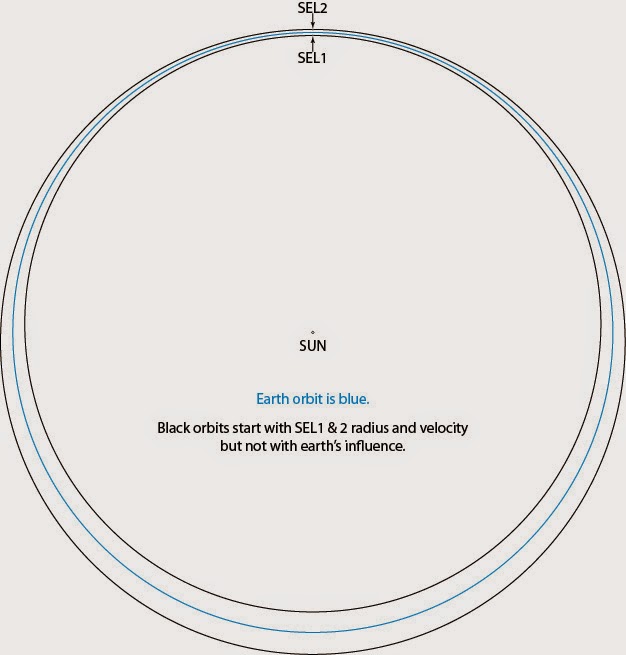 Running orbital sims gets pretty much the same result pictured above.

Mars is even worse: 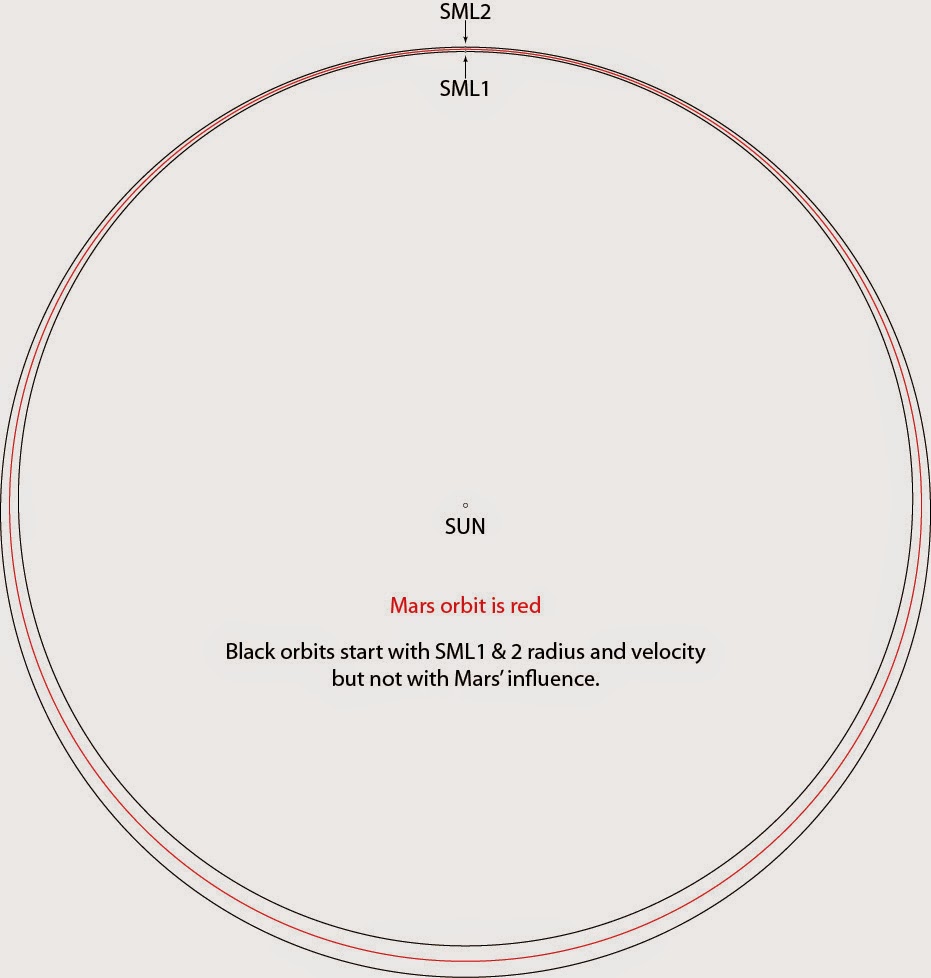 Are there weak instability boundary transfers leading from SEL2 to SML1? I don't think this particular highway exists.

To get a 1.52 A.U. aphelion, we need a departure Vinfinity of 3 km/s. To be sure EML2 can help us out in achieving this Vinfinity. In other words we could use lunar assists to depart on a Hohmann orbit. But a Hohmann orbit is different from the tube of weak instability boundaries we're led to imagine.

Pass through SML1 at 2.7 km/s and you'll be waving Mars goodbye. The Lagrange necks work their mojo on near parabolic orbits. And an earth to Mars Hohmann is decidedly hyperbolic with regard to Mars.

What about Phobos and Deimos? The Martian moons are too small to lend a helpful gravity assist. We need to get rid of the 2.7 km/s Vinf and neither SML1 nor the moons are going to do it for us.

Edward Belbruno is another well known evangelist for the Interplanetary Superhighway (though he likes to call them ballistic captures). Belbruno cowrote this pdf on ballistic Mars capture.

Here is a screen capture from the pdf: 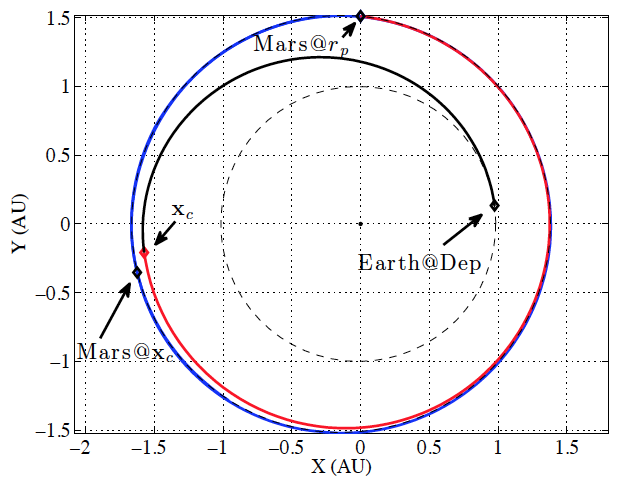 The path from Earth@Departure to Xc is pretty much a Hohmann transfer. In fact they assume the usual departure for Mars burn. Arrival is a little different. They do a 2 km/s heliocentric circularization burn at Xc (which is above Mars' perihelion). This particular path takes an extra year or so to reach Mars.

So they accomplish Mars capture with a 2 km/s arrival burn. At first glance this seems like a .7 km/s improvement over the 2.7 km/s arrival Vinf.

Or it seems like an advantage to those unaware of the Oberth benefit. If making the burn deep in Mars' gravity well, capture can be achieved for as little as .7 km/s.

Comparing capture burns it's 2 km/s vs .7 km/s. So what do we get for an extra year of travel time? 1.3 km/s flushed down the toilet!

What About Ion Engines?

"What about ion engines?" a Belbruno defender might object. "They don't have the thrust to enjoy an Oberth benefit. So Belbruno's .7 km/s benefit is legit if your space craft is low thrust."

Belbruno & friends are looking at a trip from a nearly zero earth C3 to a nearly zero Mars C3. In other words from the edge of one Hill Sphere to another.

So to compare apples to apples I'll look at a Hohmann from SEL2 to SML1. I want to point out I'm not using Lagrange necks as key holes down some mysterious tube. They're simply the closest parts of neighboring Hill Spheres.

Moreover, SEL2 moves at the same angular velocity as earth. So it's speed is about 101% earth's speed. Likewise SML1 moves at about 99.6% Mars' speed.

So given a 100 tonne payload, rendezvous xenon is 8.3 tonnes for Hohmann vs 6.9 tonnes for Belbruno's ballistic capture.

We're adding a year to our trip time for a one percent mass improvement? Sorry, I don't see this a great trade-off.

The virtually zero energy looooong trips between planets are an urban legend.

I'll be pleasantly surprised if I'm wrong. To convince me otherwise, show me the beef. Show me the zero energy trajectory from an earth Lagrange neck to a Mars Lagrange neck.

Until then I'll think of this post as a dose of Snopes for space cadets.

I'd like to thank Mike Loucks and John P. Corrico Jr. I've held these opinions for awhile but didn't have the confidence to voice them. Who am I but an amateur with no formal training? But talking with these guys I was pleasantly surprised to find some of my heretical views were shared by pros. Without their input I would not have had the guts to publish this post. 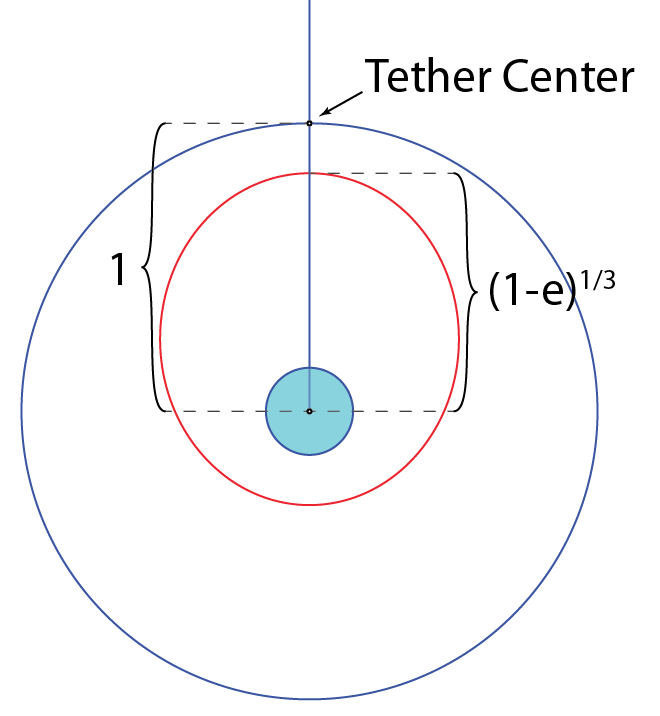 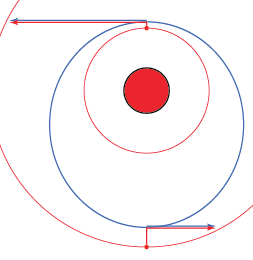 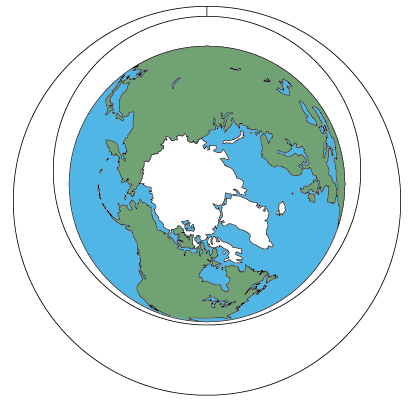 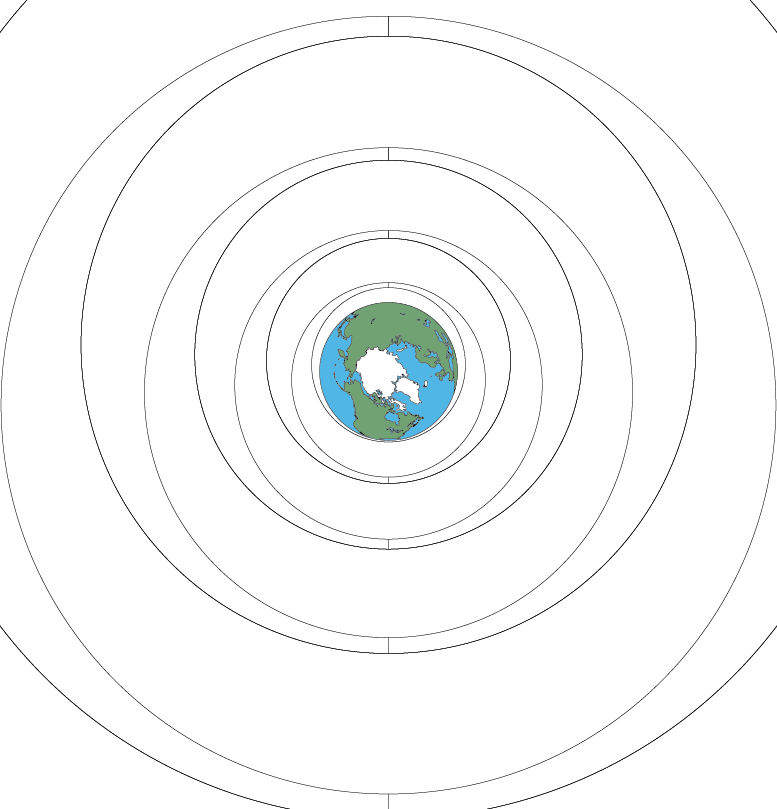 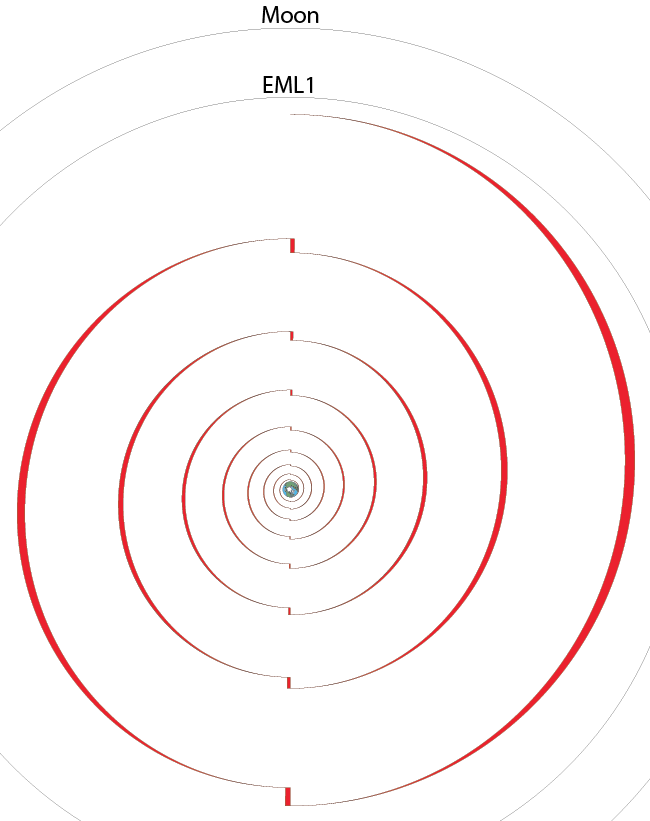 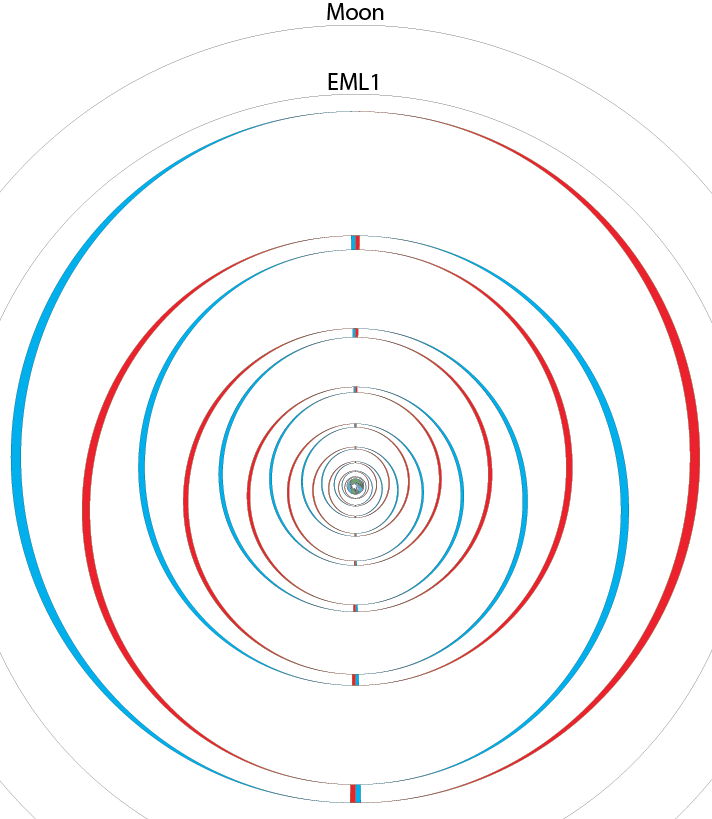 In this illustration successive ellipses vary by a factor of 21/3. Other rates of expansion are possible. Let k be the ratio of one ellipse apogee to the apogee below. k = (1+e)4/3/(1-e)4/3. Thus we can wind the spiral tighter or loosen it by choice of ellipse eccentricity.
Posted by Hop David at 12:00 PM 6 comments: