This is a topic suggested by Doug Plata. What impact will partial reusability have on efforts to settle and exploit space?

SpaceX is working on a reusable booster stage. This has potentially enormous savings.

Why is reusing a booster such a big deal? Some might think getting above the atmosphere is a minor challenge compared to achieving orbital velocity. Lets take a look at hows and whys of vertical ascent. 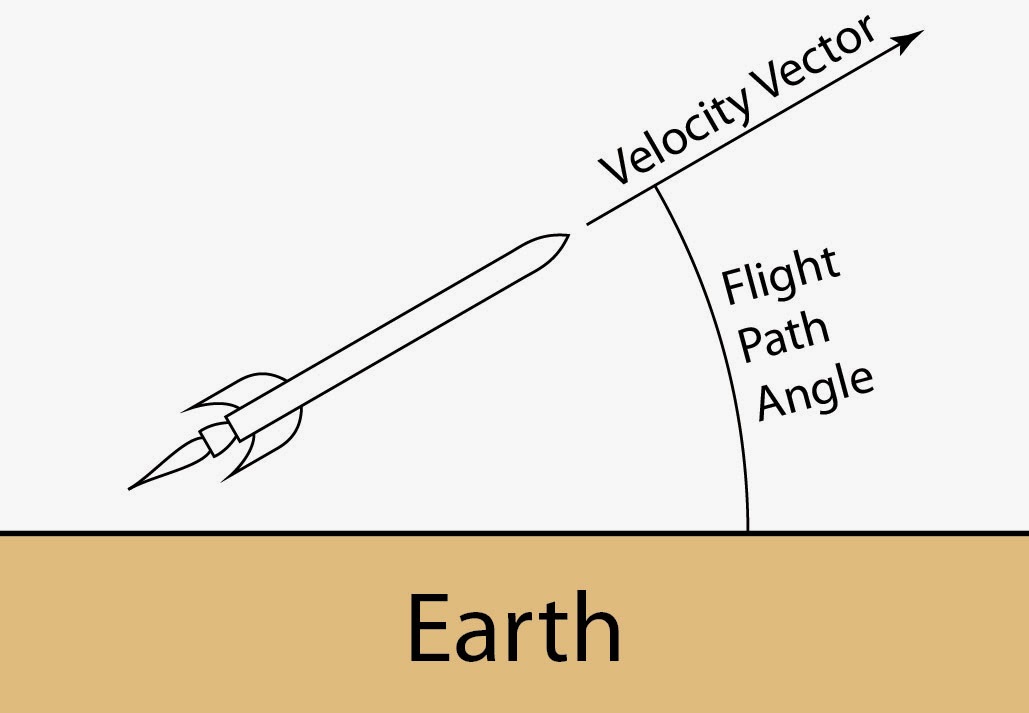 The flight path angle is the angle between horizontal and the velocity vector.


If earth were an airless world, horizontal launches would be optimal. In other words the flight path angle would be zero.

But earth has an atmosphere. To avoid a long trip through the atmosphere a flight angle closer to vertical is called for. 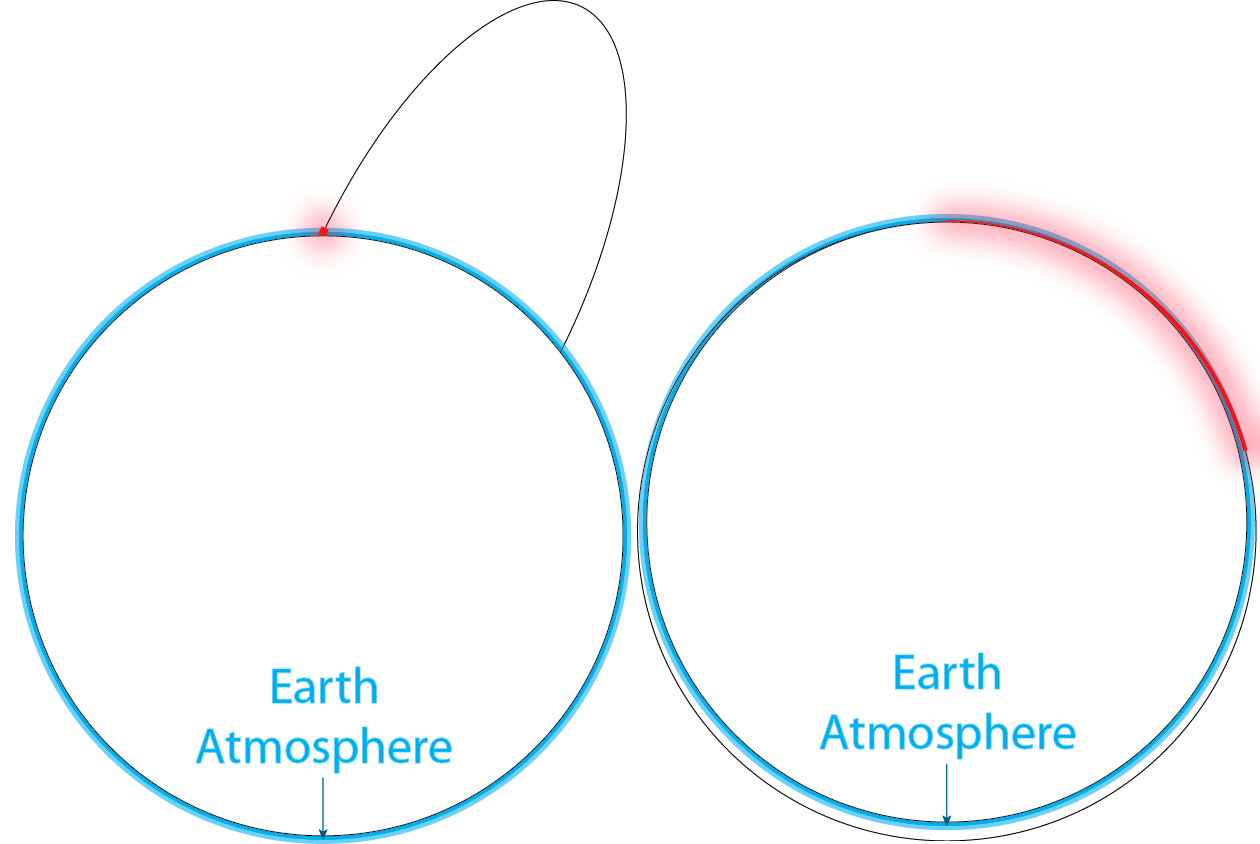 Taking off from the earth at 8 km/s, a nearly vertical flight path angle vs horizontal take off.

Low earth orbit velocity is about 8 km/s. If a spacecraft achieved this velocity at earth's surface with a zero flight path angle, nearly a quarter of it's orbit (about 10,000 kilometers) would be through earth's atmosphere.

Most meteorites burn up in the mesosphere about 70 km up. Air density at this altitude is less than a thousandth of sea level. Orbital velocity at sea level would subject the rocket to extreme temperatures.

8 km/s at sea level would give a dynamic pressure of about 40,000 kilo-pascals.

Before making the major horizontal burn to achieve orbital velocity, we must get above the dense lower atmosphere. The shortest path through the atmosphere is a vertical ascent. 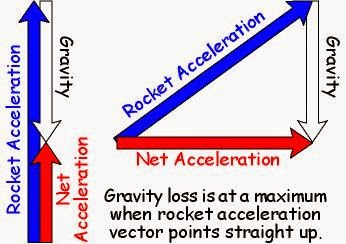 To minimize ascent time, a high thrust to weight ratio (T/W) ratio is desirable. The more oomph a booster stage has, the less time gravity loss is incurred.

A booster stage with more rocket engines will have a higher thrust to weight ratio. The Falcon 9 booster has 9 Merlin engines as compared to the second stage which has only 1.

Since a booster has 9 engines and the upper stage 1, would reuse mean 90% savings?

The upper stage also needs avionics, a power source, propellent tanks etc.. So I'd be surprised if the upper state is 10% of the expense. My guess would be more like 1/6. Still a 5/6 savings would be substantial.

But even a 5/6 savings wouldn't be realized by re-use. Still unknown are refurbishment costs. Also unknown is how many times a booster can be re-used.

I give better than even odds SpaceX's reusable booster will cut launch costs by 50%.

After the booster stage has lifted the spacecraft above the atmosphere, the upper stage provides the horizontal burn to achieve orbital velocity. This take about 8 km/s.

Tsiolkovsky's rocket equation and an 8 km/s delta V budget mandate the upper stage is about 90% propellent and 10% dry mass. The smaller dry mass fraction means more tenuous structure and less thermal protection. It is hard to see how an upper stage could endure the extreme conditions of an 8 km/s re-entry into earth's atmosphere.

I would bet against SpaceX achieving a reusable upper stage.

A capsule doesn't need a huge delta V budget. Just enough to lower it's perigee so it passes through the upper atmosphere. With a delta V budget less than 1 km/s, a capsule can have robust structure as well as a substantial heat shield.

I give SpaceX better than even odds at achieving a reusable Dragon capsule.

What does re-use do to economies of scale?

An item can be much cheaper if many units are mass produced on an assembly line. With mass production, design and development is amortized to a marginal expense.

If the average rocket engine is re-used 10 times, we would need at least a ten fold market increase to maintain economies of scale.

Could re-use lower prices enough to boost the market ten fold or more? I am not sure this would happen. What's the market for launch vehicles? Communication sats, surveillance and weather sats, occasionally ferrying passengers to the I.S.S. It's not clear cutting launch costs by half or even two-thirds would explode this market.


Economies of Scale with Re-use

The are possible new markets such as space tourism or mining. I don't expect those markets to take off so as a launch costs millions.

But what if the entire package was re-usable? The upper stage as well as booster and capsule? Reducing the cost by another order of magnitude opens many new markets: orbital hotels, lunar and asteroid mining, bases on the moon and Mars, etc..

But for upper stage re-use we would need propellent sources other than from the bottom of earth's gravity well. We would need orbital infra-structure: ferries between the various orbits and regions in our earth moon neighborhood: LEO, GEO, EML1, EML2 and DRO.

Establishing this mining and transportation infra-structure could provide the initial market. Once infra-structure is established, development of space would proceed like a snow ball rolling down a hill.

In my opinion partial re-use isn't sufficient to get the ball rolling. But it's an important step toward achieving full re-use. What happens after full re-use? If we can cut expenses down to the point where propellent is the dominant cost, I'd expect the market to explode at an exponential rate.
Posted by Hop David at 3:22 PM 10 comments: