What the heck is Vinf?

The internet is a great resource for isolated students like me without access to university libraries or college classrooms. But often Google will land me on a page over my head. I often see strange and unfamiliar terms.

Years ago I found myself gnashing my teeth and crying "What the heck is Vinf?!"

Then, as now, Vinf was a common term appearing on web pages teaching orbital mechanics.

Here is a screen capture from Atomic Rockets, a popular resource for science fiction writers:

And here's a screen capture from a Wikipedia article on hyperbolic orbits:

In the Wikipedia article they use the symbol for infinity instead of inf. By now you may have guessed Vinf is short for a hyperbola's velocity at infinity.

But why would we be interested in something an infinite distance away? 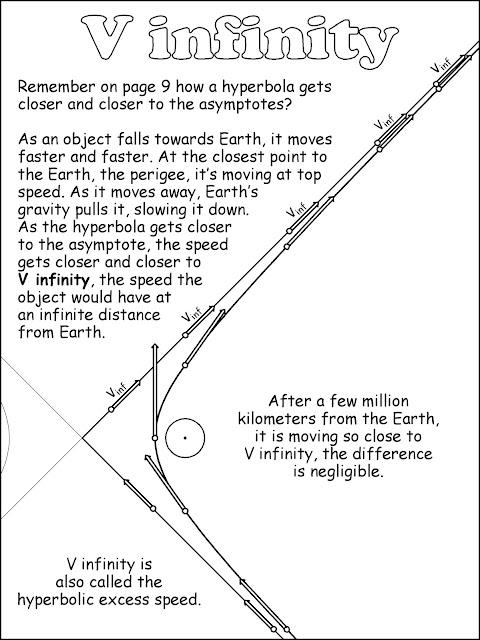 Page 36 from my coloring book Conic Sections and Celestial Mechanics 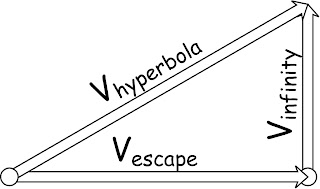 
I like to talk about hyperbolas but some people don't see the point. A fellow who calls himself Rune has informed me that transfer orbits aren't hyperbolas. 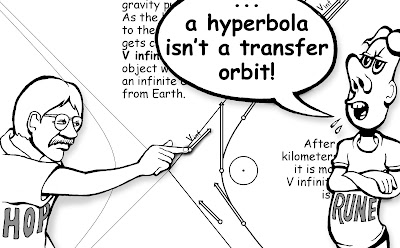 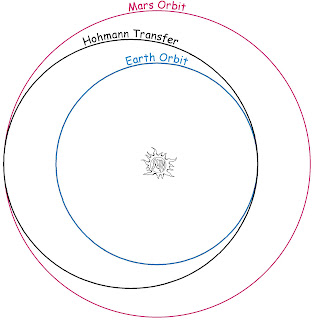 Planet and asteroid orbits are also ellipses about the sun. So what's the fuss about hyperbolas?

To see let's take a closer look at our Hohmann to Mars: 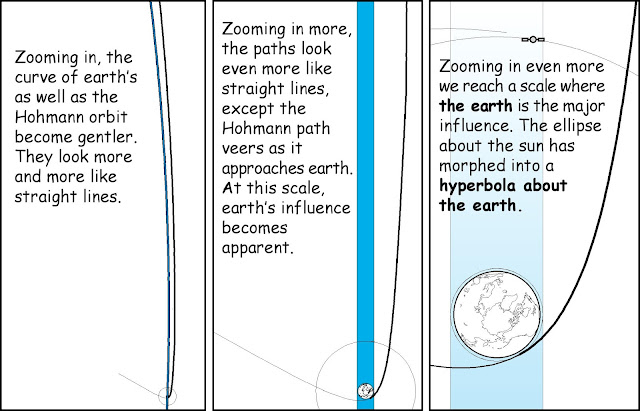 At one scale we see the path as an ellipse about the sun. But magnify the Hohmann path in earth's neighborhood and we see a hyperbola about the earth.

What is the Vinf and Vesc we use to figure the velocity of this hyperbolic orbit? Let's take another look at our Hohmann ellipse about the sun: 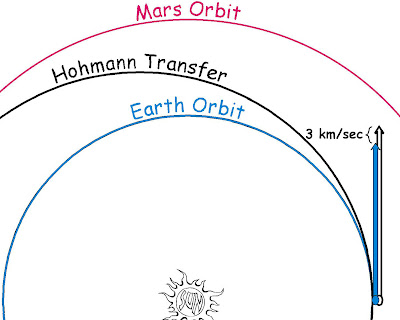 And how about the Mars hyperbolic orbit? 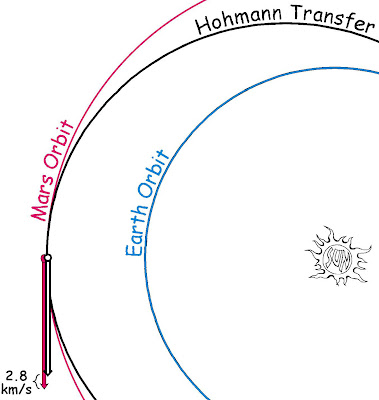 Speed at the Hohmann ellipse aphelion (furthest point from the sun) is about 2.8 km/s slower than Mars orbit. This 2.8 km/s is the Vinf of the hyperbolic orbit about Mars.

Rune as well as illustrious people like Dr. Tom Murphy like to say the delta V from earth C3 = 0 to Mars C3 = 0 is around 6 km/s. Those who know how to patch conics will tell you it's closer to 1.2 km/s.

And to properly patch conics going from planet centric to heliocentric orbits we need to know Vesc and Vinf to find the velocity of planet centered hyperbolas. Since it's important, I'll repeat this:

Thanks for the easily understood explanation.