Have your ion ISP and eat Oberth cake too.

Early versions of the Asteroid Redirect Mission suggested retrieving an asteroid in heliocentric orbit and parking it in a lunar Distant Retrograde Orbit (DRO).

Retrograde lunar orbits with apolunes below 40,000 km can be stable for centuries without station keeping. Once we park an asteroid in such an orbit, it's not going anywhere. Once we get higher than about 3/5 of a Hill Sphere radius, the orbits are more fragile.

The proposed asteroid retrieval vehicle would be powered by solar arrays and propelled by Hall Thrusters using xenon as reaction mass.

A 500 tonne rock in retrograde lunar orbit along with solar panels and Hall Thrusters would make a great anchor for a tether. It would also serve as a momentum bank.

Hall Thrusters could build the tether's momentum gradually. But catching or releasing a payload is a sudden event equivalent to an impulsive burn from a high thrust chemical rocket.

Here is one possible vertical tether whose foot is 300 km above the lunar surface: 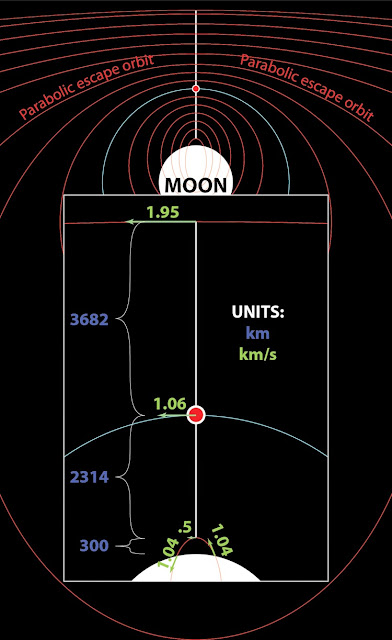 This ~6000 km tether is a lot shorter than a full blown Clarke tower. The moon's gravity well is also shallower than earth's. So this tether endures much less stress. Kevlar would suffice for the tether material and taper ratio would be about 1.4

This tether top is moving about 1.95 km/s. Releasing a payload from this tip would send it into a hyperbolic orbit with regard to the moon with a Vinfinity of about 1.6 km/s. This gives a multitude of possible orbits depending on what barycentric longitude the payload is released at.

Here is the path when released at 129º barycentric longitude, no burns: 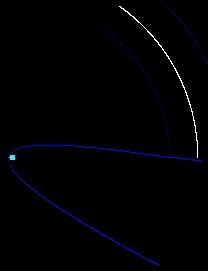 Flight time from release to perigee is about 51 hours. At perigee the speed is ~10.9 km/s, just above earth escape. This is a hyperbolic path with regard to earth with a Vinfinity of about .3 km/s. Doing a burn at this perigee would confer a large Oberth benefit. A .4 km/s burn would suffice for Trans Mars Insertion.

Here is release from the same tether but at 0º:

Something dropped from the foot of this tether would impact the moon's surface at 1.04 km/s. A circular low lunar orbit is about 1.6 km/s. So it would would make lunar landing somewhat easier. Sadly, this would only be useful for lunar sites on lower latitudes.

From earth you can lob a payload into a retrograde hyperbola about the moon. Just set apogee above the moon. This transfer orbit takes a LEO burn of about 3.1 km/s. From LEO to apogee is about 5.5 days. 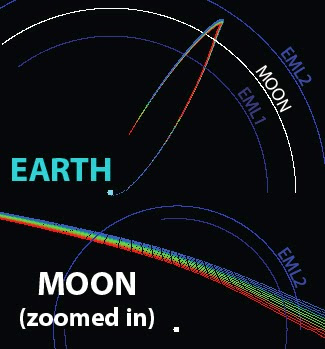 For this transfer orbit, Lunar Vinf is about .83 km/s.

There is a point on the tether that release payload into a hyperbola with this Vinf: 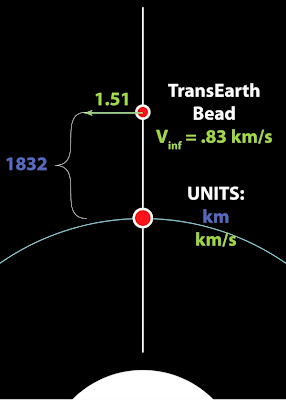 If the transfer orbit is coplanar with the tether, rendezvous with the TransEarth Bead would cost zero delta V if we had perfect control. Practically speaking, I'd expect some tweaking of the orbit, especially during the final approach.

Releasing from the TransEarth Bead can also send a spacecraft back to earth along an elliptical orbit. Tether departure zero delta V. Circularizing at LEO would take 3.1 km/s. Some or most of the circularization delta V could be accomplished with aerobraking.

So a lunar tether with an asteroid anchor can be just 3.1 km/s from earth. Some carbonaceous asteroids are 20% water by mass. Also carbon compounds. They could potentially supply life support consumables, radiation shielding and propellent. If much of the spacecraft's mass comes from the asteroid, that greatly reduces lift off mass from earth's surface.

There are many asteroids in earth like orbits whose C3 with regard to earth is just above zero. These can be parked in a lunar retrograde orbit using modest sized spacecraft. See the Keck report. A ordinary rocket like the Atlas V could launch retrieval vehicles capable of bringing back 500 tonne rocks.

At the moment one of my favorite daydreams is a partnership between Planetary Resources and Tethers Unlimited. I believe it's doable to open up the solar system.
Posted by Hop David at 5:37 PM

If you haven't already, you should read the paper Cislunar Tether Transport System by Tethers Unlimited. http://www.tethers.com/papers/cislunaraiaapaper.pdf

They describe a 200 km long tether which rotates as it orbits the moon. The tip velocity is variable because a central facility can climb towards the counterweight. This increases rotational speed due to conservation of angular momentum so a much shorter tether could be used to throw a payload out of the low lunar orbit.

Also, a 500 ton asteroid could provide nearly 2 meters of shielding for a Destiny-sized space station module. The rock could be analyzed, broken down and bagged and clipped to a lightweight frame outside the module. This would be a game changer for any habitable station at EML2.