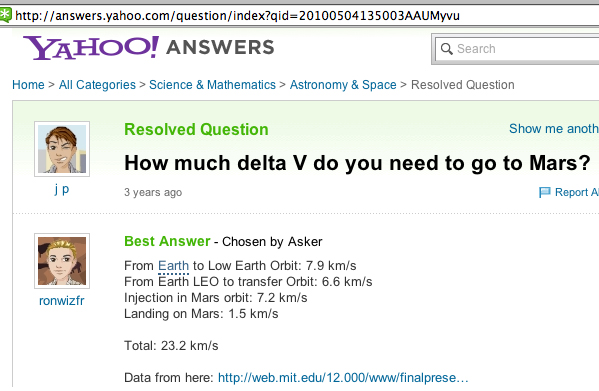 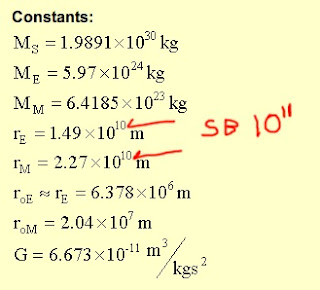 Even the very accomplished can make errors. So we should examine every assertion, no matter the source. My dad used to tell me we all put our pants on one leg at a time. His way of saying we're all human and capable of making mistakes.
Posted by Hop David at 2:51 PM

It seems you didn't do any arithmetic errors in this blog post either, so I'll just mention that when you wrote "if the earth and moon were .1 A.U. and .152 A.U. from the sun", you probably meant "Mars" and not "moon". Excellent post either way, though. :)

The last days I have spent several hours going through the calculations that you did in your Hohmann Excel spreadsheet, planning to use them for my astrophysics project on Mars colonization. When going through your spreadsheet I assumed (by the quality of the spreadsheet) that you were working for NASA or something, but you are refering to delta V calculations as a hobby? Are you completely self-taught? No academic background in natural sciences? I think you've done a very impressive piece of work either way.

Tage, thanks for the heads up. Made the correction.

I'm strictly amateur. My credentials: I graduated in the top 60% of my high school class.

I am passionate about space exploration. Maybe we are on the cusp of opening a new frontier. If so, that'd be a major turning point in human history.