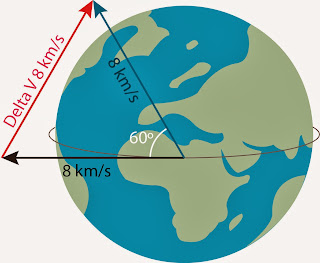 Edit: Isaac Kuo has pointed out that earth has a 30 km/s vector coplanar to the ecliptic plane. A hyperbolic orbit departing earth might have a v infinity of 3 or 4 km/s. When you add a 3 or 4 km/s vector tilted 60 degrees to the 30 km/s vector, you are only inclined 4 or 5 degrees from the ecliptic plane. Still, this is a substantial plane change! This post is incomplete as I've only looked at departure from EML2. Hopefully, I'll soon have time to look at burns at perilune and perigee burns and the possible trans asteroid orbits.
Posted by Hop David at 12:51 PM

A 60 degree plane change for 0.01 km/sec is truly amazing, but that also points up that the burn requires extreme precision, because if it is off by just 10 meters/second, you could potentially end up 60 degrees out of plane! It might be interesting to see how sensitive the final trajectory is to slight guidance errors on that one.

George, I believe you are correct. Playing with my 3 and 4 body models, I notice just a slight change in departure from L1 or L2 can make a huge difference in final orbit.

Instead of nice predictable conic sections (as in 2 body mechanics) n-body paths are chaotic, especially around L1 and L2. I think there's sort of a butterfly wing effect.

Hop,
I'm not sure this entirely solves the problem. You can do a cheap plane change--about the line of apsides between the earth and the moon. But that only doesn't change the line of apsides any--your perigee is hard to shift very much when coming back from EML-2, and if your perigee isn't on the locus of periapses for the hyperbolic departure asymptote, you may not be able to get onto the departure trajectory you need.

I *think* I know some ways to deal with all of this, but I'm not 100% sure that you can get to all departure declinations from an EML-2 starting position.

John, you mention that you might know some ways to deal with the issues you bring up. Hope you share those soon.

After dropping from EML2, there are two major burns. A near perilune burn that drops the ship to a deep perigee. Then a perigee burn for trans asteroid injection. I plan to expand this post for closer looks at the perilune and perigee burns. I believe your observations would be helpful.

Could propellant (or better yet, propulsion service) be delivered from a lunar polar ice harvesting operation to any LEO inclination in a just-in-time manner (i.e. the OTV arrives at the right orbit just before someone launches the GEO comm sat to LEO)?

If you just want to land on the pole of the moon you can indeed do Jon's line of apsides plane change early on and shoot for a flyby, near where the pole of the moon will be in a few days hence. You just have to compensate for the moon's gravity once you get within its sphere of influence, which is highly dependent on velocity (orbital eccentricity). I haven't actually done the calculations yet but it would be interesting to see how this compares energy wise to simply launching into a polar orbit from Earth, where all you give up is the boost from Earth's rotation. If you do your plane change early (like during launch) your energy hit will be quite low.

Doug, Over 27 days (moon's sidereal period) EML2 moves 360 degrees. For reaching a specific orbit, it seems to me launch should be made when that orbital plane intersects the moon's orbital plane. So I believe there'd be launch opportunities each two weeks or so.

Lunar poles could be reached by a polar orbit, as you say.

I looked at another route at http://hopsblog-hop.blogspot.com/2013/08/lunar-ice-vs-neo-ice.html

There are those who believe reaching the lunar poles takes too much delta V. As you mention it doesn't have to take a lot of delta V.

David, I'd like to pose some challenges for you to consider handling in the form of blog posts. How can I send you those challenges?

No spaces, numbers not spelled out, etc.