A few notes on my old spreadsheets

Up to now, most of my spreadsheets for vertical tethers and elevators have been based on Jerome Pearson's work. The taper ratio I've used is based on equation (10) from Pearson's The orbital tower: a spacecraft launcher using the Earth's rotational energy. A screen capture from Pearson's PDF: 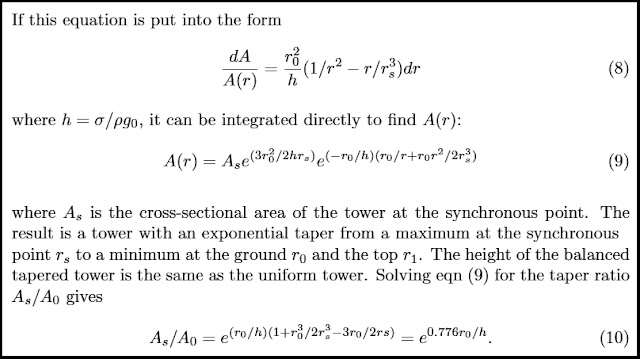 Pearson is looking at a very specific vertical tether here, a space elevator whose foot is at earth's surface (r0) and whose balance point is at geosynchronous orbit (rs).

But I make some substitutions to make Pearson's equations more general:

Substitute r0 with rfoot, the distance of the tether's foot from body center.

Substitute rs with rbalance. By rbalance I mean the point on a vertical tether where centrifugal acceleration exactly balances gravity.

My resulting spreadsheets were cumbersome and complicated. I don't like complicated -- more opportunities for error. And indeed my early versions had many errors that gave obviously wrong results. Through careful proofreading and many bottles of aspirin I started to get numbers that matched Pearson's. But I remain uncomfortable with these sheets.

Then Chris Wolfe sent me his Phobos tether spreadsheet. Chris' approach is simple and straightforward.

And so on up to the balance point.

Summing the mass of these cylinders gives a very good approximation of tether mass.

I had used a similar approach for calculating tether mass: 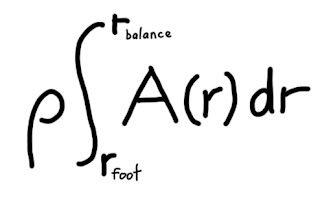 Tether mass is tether density times an integral giving tether volume from foot to balance point. For cross sectional area I used Pearson's equation 9 (see top of page). Being unable to solve the integral analytically, I chopped the tether into many small lengths and did a Riemann sum. In other words my numeric method for calculating mass is nearly identical to Wolfe's. Except Wolfe has a simple and straightforward method of getting the cross sectional area.

The numbers from my spreadsheets closely match Wolfe's which also seem to match numbers from credible folks like Pearson or Aravind.

We can look at mass of decoupled upper tether length

If you have a huge anchor mass (like Phobos), the upper length becomes decoupled from the lower. The need to balance newtons from above with newtons from below is no longer an issue when anchor mass is 1.07e16 kg.

With Wolfe's method we can ditch the irrelevant h. Just as with the foot, we can start with net newtons at the tether top and then work our way down to the balance point.

We can look at moon tethers balanced from L1 or L2

Pearson's elevator model assumes two accelerations, earth's gravity and centrifugal acceleration. Wolfe's model can easily include a moon's gravity in the net acceleration. I am looking forward to tweaking Wolfe's spreadsheet to look at lunar elevators from EML1 and EML2.

Chris Wolfe's tether model enables me to scrutinize many of my favorite scenarios in more detail.

Besides this wonderful spreadsheet, Chris sent me a lot of other neat stuff. As time and energy allow, I'll use his ideas as the basis of drawings and discussions.

August 8 edit: Chris Wolfe has started a new blog Bootstrapping Space. I am predicting it will be an increasingly valuable resource as time goes by.

Thanks so much Hop!

I can only hope to provide a tiny fraction of the insight you have been providing for years.

The sheet almost certainly contains errors, but it does appear to be a good first approximation. I hope to examine multiple climbers in the near future. Corrections and alterations may be made to the live document; anyone who wants it can use or modify it, but you might want to check the original link once in a while for corrections.