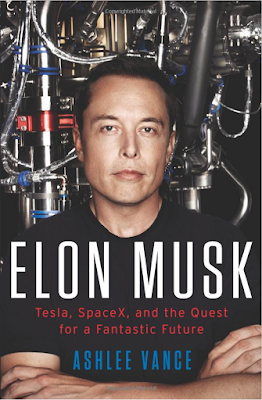 Elon Musk  Tesla, SpaceX and the Quest for a Fantastic Future
by Ashlee Vance.

Each chapter of this book struck a chord with me. As usual this will be a Spinrad style review where I use Vance's book as an excuse to jump on my soapbox.

I often feel like we're trapped in a bleak George R. R. Martin story. Rate of growth may be slowing but the planet's population is still rising. Appetite for consumer goods is climbing as the third world catches up to industrialized nations. In the meantime finite resources are getting harder to come by. Hydrocarbon fossil fuels aren't going to last forever.

ERoEI should be a term on everyone's mind. But policy makers and general populace remain oblivious. What's trending at the time of this writing? Caitlyn Jenner, presidential candidate Trump is saying we need to build a big wall along our southern border to keep out Mexican rapists, Justin Beiber's naked butt on Instagram.

It's like Game of Thrones. Greed, stupidity and cruelty triumph time after time in spite of the hero's best efforts. In slow motion we're watching our derailed train head for a cliff and nobody's putting on the brakes.

A Dream of Spring

But there's a ray of hope. Unlike Martin's gritty realism, Musk seems to be a character from the golden age of Marvel comics. A Tony Stark like character who actually does triumph over insurmountable odds. Vance describes several periods in Musk's life where doom seems imminent. But through sheer tenacity he overcomes one impossible obstacle after another.


… Soon he owned a Commodore VIC-20, a popular home machine that went on sale in 1980. Elon's computer arrived with … a workbook on the BASIC programming language. "It was supposed to take like six months to get through all the lessons," Elon said. "I just got super OCD on it and stayed up for three days with no sleep and did the entire thing. It seemed like the most super-compelling thing I had ever seen."

(Added emphasis mine). OCD is one of my major faults. How many times have I stayed up til 4 a.m. playing Tetris? How many hours squandered in the labyrinth mazes of Zelda? Etc.

But a crippling flaw can also be an empowering strength. Now I feel less guilty when I get lost doing a drawing or obsessed with a geometry problem.

Musk has a peculiar mental make up. Other factors came together for a perfect storm making Musk a game changing personality. His father was a well to do engineer. Musk had the opportunity and will to master several key skills during a time of dramatic change.

What happens after peak oil? Nuclear might take care of our electricity needs. But what about transportation? Cars and trucks use gasoline.

There's the Prius -- a misbegotten bastard child of gas and electric with extra mass and complexity.

The fully electric cars I had seen were golf carts that needed to be recharged every 20 miles.

Then Tesla blew my opinions out of the water. An electric car with oomph as well as range. Learning of this car's existence filled me with relief and joy.

I was also delighted to hear of the improved energy storage with lithium ion batteries. This makes solar power more viable, another arena in which Musk is fighting the good fight. I still believe nuclear will be our primary source of power. But improved storage means solar will play a more prominent role.

Tesla and Solar City are traded on the stock exchange. For TSLA and SCTY he regarded going public as a Faustian deal, a necessary evil. He explains that shareholders tend to have short range goals, a profitable quarter while he has a more long range agenda. Well, I've gone on E-Trade and bought one share of Tesla and three shares of Solar City. I am one shareholder that endorses Musk's long range goals. Musk managed to avoid going public on SpaceX

For decades we've been spinning our wheels in low earth orbit. Human Space Flight has been the cash cow of near monopolies that don't care about humanity's future. For our elected officials, HSF is a pork barrel program for buying votes.

New Space pundits like Rand Simberg or Henry Spencer have long been advocating a competitive space market. They rightly point out cost plus contracts encourage graft. That savings can be realized with mass production when R&D expense is amortized over many units.

But these insights weren't sufficient to overcome inertia. That is until Musk came along.

That Musk has built a new aerospace company from the ground up is an amazing accomplishment. I had placed my bets a new player would win the 100 kilometer X-prize. But a new kid on the block achieving orbit and remaining solvent? That took me by surprise.

Many of the possible economies Spencer and Simberg predicted have been realized by Musk. Economies of scale. A supply chain distributed through many congressional districts and policies set by committee guarantees waste.  Much of SpaceX parts are made in house. Central management is lean and mean with little or no duplication of effort. Musk has already brought down the cost of getting to orbit.

One of the most exciting SpaceX goals are reusable space vehicles. How much would a transcontinental trip cost if we threw away a 747 each flight? Musk correctly sees quickly and economically reusable space ships as a prerequisite for breaking free of Cradle Earth.

How about a SpaceX reusable upper stage? I'm betting against it. An upper stage's big delta V budget makes for a difficult mass fraction. If dry mass is 8% or less, it's hard to have robust structure and thermal protection. Re-entering the atmosphere at 8 km/s subjects the space ship to extreme conditions and I can't see the delicate eggshell of an upper stage surviving this abuse.

But maybe I'm wrong! I already have egg on my face for earlier bets against Musk. If I'm right, I believe Musk will find other ways to deal with upper stage re-entry. Maybe he'll look at solutions like extraterrestrial  propellent and/or momentum exchange tethers.

Musk has beat the odds numerous times in the past. I'm betting he'll continue to surprise people in the future.

Until pretty recently Musk and SpaceX were hardly even on my radar, so I don't recall what I thought - probably just that he was at least blowing his money on a rather cool egomobile instead of a crass one. But demonstrably he is in an entirely different class.

The thing that strikes me most about SpaceX is the sensible-shoes conservatism of the Falcon architecture. No SSTO, no aerospikes, no fancy schmancy anything. Just a very basic approach to a booster stack, robust enough to accommodate bold experimentation like recoverability.

Since I know absolutely nothing about matters automotive, I can pass no such judgment about Tesla. But I just read something about them introducing an über high end sports car, which sounds like the sort of thing you do when you want to engage the active attention of gearheads.

A former neighbor remarked that when you hand the world over to billionaires, your basic choices are Donald Trump or Elon Musk. On a certain level, the difference between fake spectacle and the real deal.

Second stage (not third, of course) can be refueled by space-born oxygen and hydrogen, produced from water, descended in Earth gravity well. Then second stage can drop its velocity and land safely on the Earth surface.

Anonymous, what do you mean by "space-born oxygen and hydrogen"? Water mined from near earth asteroids or the lunar cold traps?

Please give yourself a handle as I don't like responding to "anonymous".