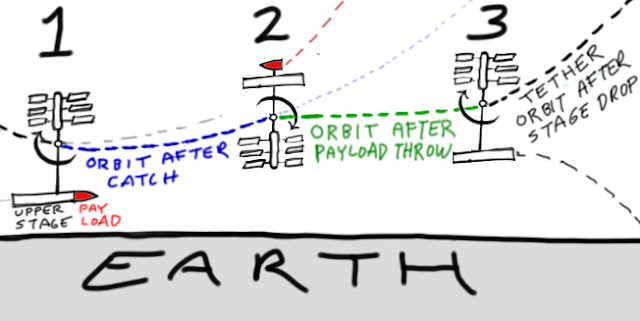 I think you just hit on a big help with the rotovator concept.

Rotovators have the big problem that they must slow as much as they boost to maintain their orbit. With ongoing lunar mining this would not be a big deal, they could deorbit mining slag to get the needed energy.

However, lacking such material the deorbit mass has to come from stuff we put up there with rockets which sort of defeats the rotovator concept. However, if we deorbit boosters that means the rotovators can pick up some of the load. We will still need orbit-capable rockets but not as many.

It's like SpaceX only recovering the first stage, not a complete answer but a big improvement on the status quo.

Upper stages would have to be designed specifically for this purpose, with enough tensile strength to handle the pull of the payload. A grapple fixture would be attached to the engine end. Internal baffles would manage the slosh of residual fuel as the direction of acceleration reverses. The payload mount would have to release the payload very precisely, perhaps controlled remotely by the rotavator platform itself. After the payload is released the upper stage could be released at the appropriate point by the platform.

One of the more interesting options here is the ability to stay attached to the rotovator for a full orbit, so the upper stage can be returned to a precise spot for recovery without having to cross hundreds or thousands of km crossrange to return to the pad.

I'm not sure how much energy you can harvest from the upper stage in the end. The available kinetic energy is based on the upper stage mass and velocity at capture. Since the mass isn't going to change all you can do is reduce the velocity at release. The problem then becomes how to build a rotovator that can capture at a reasonably high speed and later release at as low a speed as possible. If the capture is performed at low horizontal velocities then the available energy is minimal. If we specify that the upper stage and payload are flying a relatively traditional trajectory then they may have velocities of several km/s. In that case capturing several tons (4.9t for Falcon 9 upper) at a few km/s then releasing it at near zero velocity would harvest substantial energy.

My question would be, why use a traditional upper stage at all? The second stage of a Falcon 9 is around 110 tons fully fueled. Delete that, eliminate the interstage and you should be able to put 20 tons of payload nearly into orbit on its own. I'm using published Falcon 9 numbers just for reference but other vehicles would see similar results.
- average Isp 290
- 90% fuel, 409.5t
- 22t dry mass yields 23.5t of payload
- gross dV 6.5km/s, net velocity perhaps 5.5km/s or a bit more
This gives us about 333 GJ of kinetic energy from the first stage dry mass. If we need to kick the payload up another 5km/s to GTO that will cost us 294 GJ. The remaining energy stays with the first stage (released at just under 1.9km/s relative to surface), unless the station needs to keep a bit of it for stationkeeping. I'm not sure how much fuel mass is needed for landing but it would only be subtracted from payload 1:1, while the fuel that would have been used for the initial return burn is saved.

We're still getting all of the energy from the chemical propulsion system. The difference is now we can transfer almost all of that energy directly to the payload, wasting none on excess velocity of the booster hardware itself. An entire stage is saved, allowing for fully reusable single stage cargo to orbit (to GTO even) with a modest 90% fuel fraction and without the problem of orbital velocities on reentry. The added complication is that the rotovator needs to be able to perform captures and releases at finely-tuned and variable velocities; I don't see this as a major issue compared to the problem of capture in the first place.

Let's work a slightly different example. Same SSTO vessel based on F9 first stage, only this time the cargo is a set of four 2.2-ton interplanetary probes. Our fuel fraction is now 93%, total dV is 7.6km/s and actual velocity is perhaps 6.4km/s at intercept. The booster's kinetic energy is 445 GJ. We add 10km/s to the payload, which is enough for solar escape (very similar values for the outer planets); this takes 110 GJ per probe or 440 GJ total.

It's an irrelevant thought, but a fun one. While launch windows are not likely to align for all four gas giants, a flight of four independent vehicles could explore the moons of one planet. Losing one probe would not be a mission failure, so the individual probes can be built to less rigorous and much less expensive reliability targets. That does mean duplication of communications, power and propulsion hardware across multiple craft but it also means the opportunity to take observations from multiple perspectives with the same sensors at the same time. Another possibility is that one pair might have high-power communications and serve as a data relay while the other pair omit that hardware in favor of heavier sensors or more maneuvering fuel for mapping runs. If this kind of deep space probe were to become affordable enough we might start launching them more often, getting more consistent and timely data about the other planets in our neighborhood.

Some off the cuff thoughts. I remember seeing a documentary over a decade ago that illustrated this. Of course, animations make it all look nice and plausible. The problem is you are talking about timing the capture of a multi-ton BULLET. This is hard for a lay-person like myself to accept as realistic. Think about all that goes into stopping, say, a fight-jet on an aircraft carrier: something moving far less than even one kilometer a second. In the rotovator, you would need to snag your speeding-bullet-ship with some serious elastic strapping. I have no doubt it can be done, but I don't that the braking system needed to reduce the g-shock wouldn't make the idea impractical. I'm sure several papers on the idea are out there, but because of the capture problem, I haven't pursued the scheme as a topic of study.

Brian, what we need to look at is relative velocity.

For example, let's look at two boys playing. They're both moving 30 km/s about the sun. Does that make the game of catch impossible? No. Because relative to one another, they're moving zero km/s.

At the time of catch, ideally the payload and the tether's catcher's mitt will be moving the same speed and direction. In other words, relative to one another -- motionless.

However they don't remain motionless with regard to one another. How quickly they fall away from each other depends on the net acceleration felt by the tether's catcher's mitt. If net acceleration is 9.8 m/s^2 (same as what we feel on earth's surface), the catch would be somewhat like a helicopter dropping a ladder to the ground. Both the ground and helicopter are nearly motionless with regard to one another but the helicopter is being drawn towards the ground at 9.8 m/s^2. The helicopter needs to spend energy to resist the acceleration. So a quick catch is desirable if we want to avoid an extended hover.