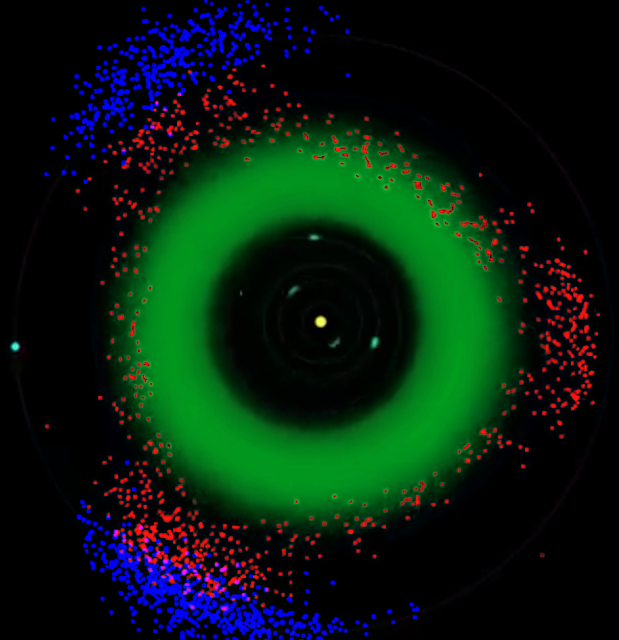 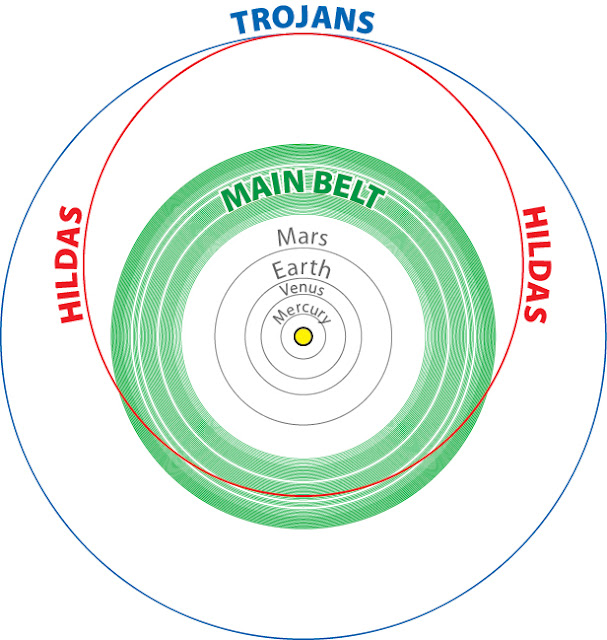 "I'd love to see science fiction stores set on 624 Hektor."

The closest I'm aware of is one of Poul Anderson's _Tales of the Flying Mountains_ "Ramble with a Gamblin' Man", set mostly on 1143 Odysseus, but with a reference to government of the Leading Trojans being based on Hektor.

Jim, now that I think about it I recall William Barton had written a story that included a Trojan location. Can't remember the details at the moment.

SJL3 sounds like a great place for an observatory. Instantaneous parallax measurements with a baseline anywhere from 9.8 to 10.9 AU would be quite useful in directly measuring distance to astronomical objects. Could also be useful for constraining properties of exoplanets.

The Hildas would be quite isolated outposts, only seeing other people every four years or so. Permanent residents might see three or possibly four orbits over their lifetimes. Rescues would be terribly unlikely in case of problems, so this would be a very hardy and self-sufficient lot.

The main belt objects visited by Hildas would be similarly isolated, particularly since many of them would not fit a simple resonance (that is, may not see the same Hilda more than once a lifetime). On the other hand, if there are a lot of Hildas (and probably a lot of cyclers on inner system trajectories) then any given rock will see new people pretty regularly.

The Trojans could be centers of trade and manufacturing, with relatively frequent visits from a series of Hildas and abundant local resources but without the radiation and impact hazards of Jupiter orbit.

It seems to me that a Hilda outpost would be at a disadvantage in terms of local resources compared to the Trojans and the main belt. Other than the essential life support work there would be little in the way of employment opportunities.
One way around this: colleges. Each leg of the trip would produce a new crop of four-year degree graduates for placement. Families with children might depart for a destination 2 or 3 hops away so their kids graduate by the appropriate arrival date. If these outposts go beyond vocational training then perhaps an environment suitable for research and innovation can be developed, particularly since the results of intellectual pursuits can be traded by radio and may not require a lot of materials to produce. Of course the drawback is that if you need something you don't have and can't build then you'll be waiting a long time. Perhaps that can be mitigated through research cooperatives that can run experiments at a better-equipped facility when needed.
I think this kind of seminomadic / journeyman society would help promote genetic diversity and encourage regular contact between enclaves while (hopefully) reducing stereotypes / prejudices. It would require a fairly strong social safety net for those people who trained four years for a job that doesn't exist when they arrive. Probably every person would have to work in maintenance / life support to pay their way and to be capable of pitching in when necessary later in life. I think the sort of long-term thinking required to efficiently distribute talent and resources in this environment would be a benefit to social stability for the species.

It is not really clear: What would be the advantage of traveling with a Hilda compared to a space ship with a similar trajectory? You would still need the same Delta V?

I suppose one advantage would be that you can live of the land (or "the stone") during the travel time, but I didn't find this in your article.

Paŭlo Ebermann, I'll use Aldrin's terms for cyclers. He calls the large body people spend most their time traveling in "Castles". Then the vehicles that ferry passengers between the castle and destination (or departure body) are called taxis.

Yes, for the taxis to depart a body and rendezvous with a castle, they would need the as much or more delta V for a normal injection to a transfer orbit.

But the taxi trip between Ceres and a Hilda cycler wouldn't take 4 years. More likely days to weeks. The extensive radiation shielding isn't needed. Having an 5 A.U. aphelion, it's likely a lot of the Hildas have lots of water and other volatiles. So there's likely abundant radiation shielding. Lots of regolith is also good shielding.

And with lots of volatiles also comes oxygen, water, hydrocarbons. It might be possible to "live off the land" as you say.

So in short, taxis need as much or more delta V, but they can be a lot less massive. I believe you're right. That would be worth mentioning in the main body of my article. I'll do so when I have time and energy...