What is more, the orbit is very nearly circular.

(Thank you to Dr. Kirby Runyon for pointing me to this paper).

A tether could be extended from Pluto's near point to Charon's near point. Since the orbit is so nearly circular and obliquity is tiny, there would very very little flexing of this tether.

To remain aloft, a tether anchored to Charon would need to extend past the L1 point more than 10,000 kilometers to within nearly 2,500 kilometers of Pluto's surface.

This tether would be more than 15,000 kilometers long. Using Wolfe's Spreadsheet we find Zylon taper ratio is 1.13. Tether to Payload mass ratio is .88. This is with a safety factor of 3.

All The Way To Pluto

Extending the tether an additional 2,500 kilometers anchors it to Pluto's surface.

Still acceptable but dramatically different from a tether only 2,500 shorter. This is because we dropped the tether foot into a much steeper part of Pluto's gravity well.

At L1 net acceleration is zero.

It's easy to see most of the stress newtons come from the close neighborhoods of Pluto or Charon. It might be worthwhile to build standard compressive towers at the elevator anchor points.

Space craft with very good ISP have meager thrust. With such space craft soft landings on Pluto or Charon would not be possible. Nor could they leave the surface of these planets.

But a low thrust craft could dock with the elevator at L1.

From L1 a small nudge could send passengers or cargo towards Pluto or Charon. And gravity would pull it the rest of the way down.

I believe Pluto Charon L1 would become  a major metropolis on the corridor between two major city states as well as a port to the rest of the solar system.

The Edge of Sunlight

Sunlight falls with inverse square of distance from sun. Asteroids 3 A.U. from from the sun will receive 1/9 of the insolation we enjoy on earth. Sun Jupiter Trojans at 5 A.U. will get 1/25 the sunlight. We could compensate by constructing large parabolic mirrors to harvest sunlight. 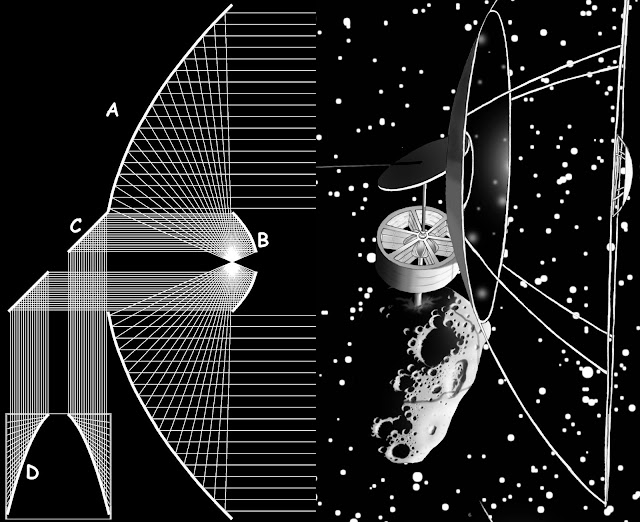 But Pluto  has a 30 A.U. by 49 A.U. orbit. And most of the time it dwells in the neighborhood of aphelion. 1/492 = about 1/2400. Mirrors for the KBO nation states would need to be vast. Mike Combs wrote a neat story featuring these sorts of mega mirrors. As much as I enjoy Mike's story, I don't think such monster mirrors are practical.

Will our technology achieve practical fusion power plants? Maybe. If so, that would vastly expand our possible frontiers.

There's nothing like logistic growth ceilings to motivate opening a new frontier. As we settle and fill up one frontier, we start looking over the horizon. I'm going to make some wildly speculative predictions. This is a science fiction blog, after all.

1st space frontier: NEAs, Luna, Mars, Phobos and Deimos. This would give us one or two millennia of unrestrained growth.

2nd space frontier: The Main Belt. Three millennia of exponential growth. Ceres will be the capital of this United Federation of Main Belt Nation States. This frontier will open within a century or two after we establish a strong foothold on Mars/Phobos/Deimos.

3rd space frontier: The Sun Jupiter Trojans. The Hildas will be our ride from the Main Belt to the Trojans. It will take five hundred years to fill the Trojan petri dish.

4th space frontier: The Kuiper Belt as well as the icey moons of Saturn, Uranus and Neptune. As mentioned earlier, this would require practical power sources other than sunlight. Pluto will be the capital of the United Federation of Kuiper Belt Nation States. This frontier will take 10 millennia to expand into.

Enough wild eyed fantasy. Back to mundane stuff like space elevators in the Kuiper Belt.

To maintain tension and remain , an elevator from Charon's far point through the Pluto Charon L2 would need to extend 41,000 kilometers. With a safety factor of 3, Zylon taper ratio would be 1.14. Tether to Payload mass ratio would be  about .3.

This elevator could also help with transportation between Charon and the other moons of Pluto: Styx, Nix, Kerboros and Hydra.

An ion craft could also dock with Pluto Charon L2, so L2 could also serve as a port to the rest of the solar system. There are heteroclinic paths between L1 and L2 so transportation between the two elevators would be easy.

Clyde Tombaugh discovered Pluto on February 18, 1930. February 18 is my birthday! So I guess it's only natural I'm interested in this body, we're practically twins.
Posted by Hop David at 12:08 PM

Connecting them with a tether requires that neither body wobble and that their orbits be perfectly circular. (Although the latter could be solved by using two tethers that are on rails with respect to each other so the joint could slide.)

Loren, their orbits are circular. As mentioned in the 2nd paragraph above. Charon's orbit is coplanar with Pluto's equator. This is an outcome of eons of tidal evolution.

Loren, I made an error when trying to post your comment. Sorry. I believe your comment was something to the effect even a degree inclination would induce unacceptable wobble.

The inclination of Charon's orbit with regard to Pluto's equator is .001º. If my trig is correct, that means a variation of 3 millimeters in tether length over an orbital period.

I notice you participated in discussion of a Pluto elevator on the Space Stack Exchange. Aramis' answer and info are wrong.

I wasn't worried about the inclination of the orbit, but rather the degree of tidal locking. Our moon wobbles, are we sure Charon doesn't? (And Pluto for that matter)

Also, I was worried about how circular the orbits are. Even a tiny eccentricity means the tether length has to change. (Note, however, that this could be solved by having two tethers that ride on rails with regard to each other.)

Is there a self-stable L1 tether touching neither Pluto or Charon? And just as the tether is thinner/lighter if you don't quite reach Pluto, is there a similar gain by not quite reaching Charon?

It's not as if volatiles are going to be in short supply on either Pluto or Charon (or the small moons, for that matter). So a small shuttle going to/from an orbital station (perhaps built inside one of the larger, smaller moons), refuelled at either end, would provide that last-mile link for payloads coming in on orbit-only high-Isp low-thrust propulsion.

Paul 451, L1 is not stable. If the tether's not anchored it would need constant station keeping or else fly off into a chaotic trajectory.

Chemical shuttles between orbital stations and Pluto or Charon would be an option.