This post revisits Orbital Momentum As A Commodity. But now I will examine these tethers using Wolfe's spreadsheet.

I envision 3 equatorial tethers to move stuff back and forth between LEO and the lunar neighborhood: 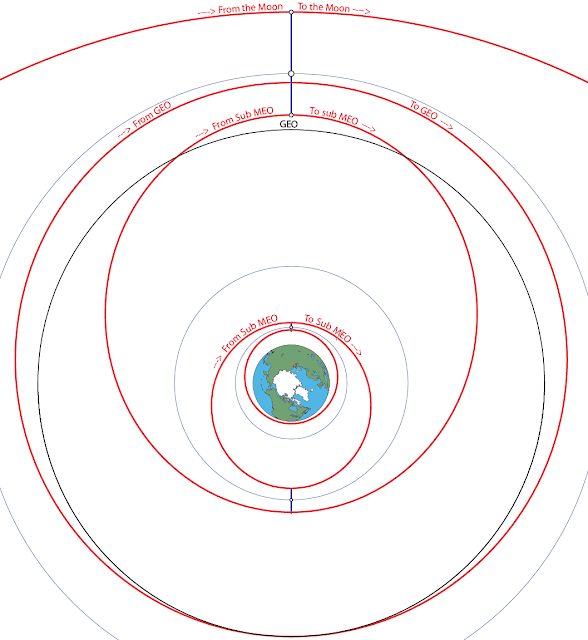 The location of these vertical tethers avoids zones of orbital debris: 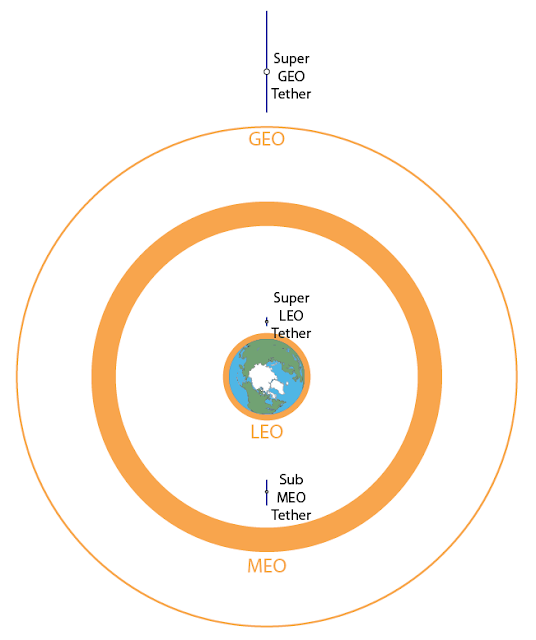 The orange regions, LEO, MEO and GEO, have high satellite and/or debris density. Thus tethers in those regions would be more vulnerable to damage from impacts.

Unless elevator mass is lot more than the payloads, the acts of catching or throwing could destroy the tether orbit. At first it looks like the need for a substantial anchor mass is a show stopper. But there are a large number of dead sats in equatorial orbits. By one estimate,  there's 670 tonnes in the graveyard orbit above geosynch.

The dead sats gathered might have functioning solar arrays. According to this stack exchange discussion, solar arrays degrade by 2 to 3% a year due to radiation, debris impacts and thermal degradation. Thus a 20 year old array could still be providing 50% to 66% of the power it delivered at the beginning of its life. The parabolic dishes for high gain antennas might also be salvageable.

Whether functioning or not, solar arrays as well as other paneling might be used as shades to keep propellent cold. If our tethers receive propellent from the moon or from asteroids parked in lunar orbit, shades would help with cryogenic storage. 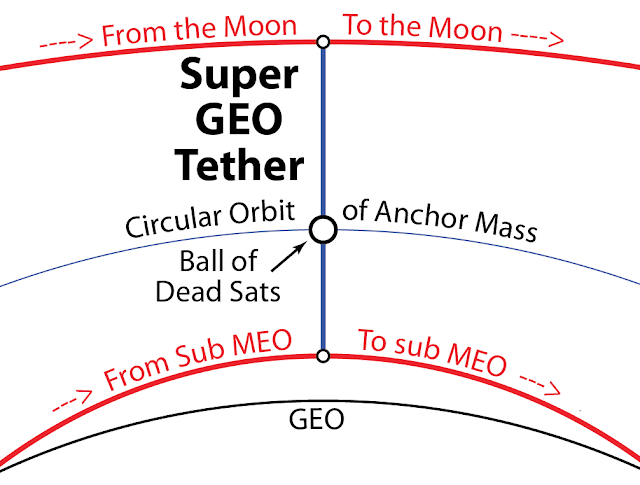 The circular orbit pictured above is 10,000 km above Geosynchronous Earth Orbit (GEO). The lower part of the tether has a length of 7,000 km and the upper tether is 10,340 km in length.

A Space Stack Exchange answer estimates there are 670 tonnes of dead sats in the geosynch graveyard orbit. Here is a page that tries to estimate total mass in earth orbit.

Delta V to raise the dead sats to this higher orbit is about .28 km/s. This might be accomplished with ion engines. Also the elevator could be used to send some to the sats towards the lower MEO tether. This would help with the .28 km/s delta V budget.

The payload apogee is at lunar altitude and the payload's moving .53 km/s. The moon moves at about 1 km/s. So Vinf with regard to the moon is about .47.

The tether foot drops a payload to rendezvous with the MEO tether. 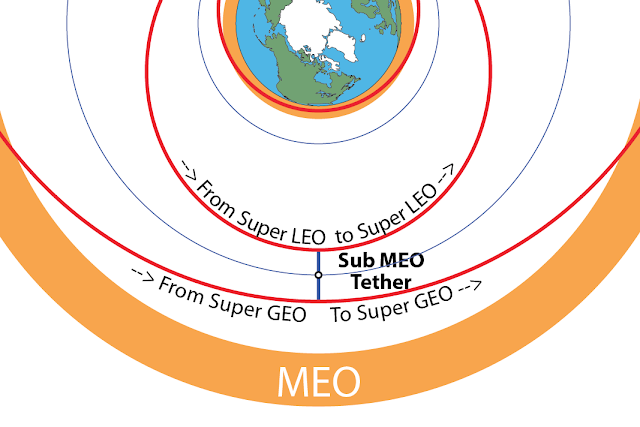 The circular orbit of the Sub MEO anchor mass is has a radius of 19,425 km. To get satellites from the super synchronous graveyard orbit to this orbit takes about 1.4 km/s. Some of that 1.4 km/s might be accomplished with the super GEO tether. Sending mass downward would help push the remaining GEO sats upward.


The Low Sub MEO tether sends and receivse payloads to and from the upper Super LEO tether. 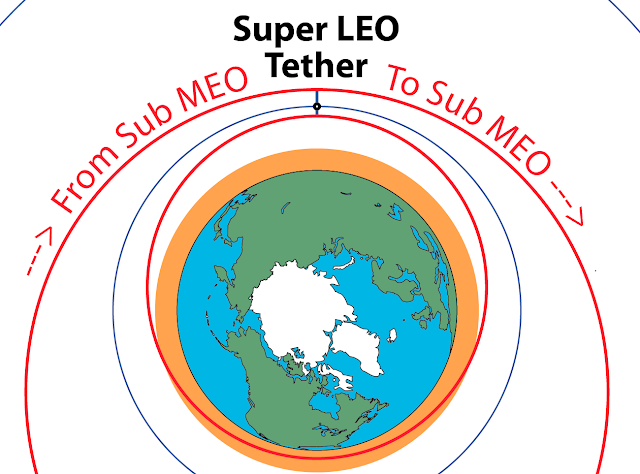 The anchor mass is in a circular orbit of radius 9300 km.

The payload apogee is at lunar altitude and the payload's moving .53 km/s. The moon moves at about 1 km/s. So Vinf with regard to the moon is about .47.


Perigee altitude is about 300 km. Circular orbital speed at this atltitude is about 7.7 km/s. To send a LEO payload on it's way to the Super LEO tether would take about .6 km/s.

Sending a payload from the tether to LEO can take less than .6 km/s as the delta v needed for circularizing can be provided by aerobraking.

We've looked at a total of 6 tether lengths, the upper and lower parts of 3 vertical tethers.

Thus 38 tonnes of Zylon could accommodate 10 tonnes of payload. That's not too bad.

A much larger problem is the anchor mass needed for each tether. There are lots of dead sats just above GEO that could be gathered for the Super GEO tether anchor mass. But anchor masses for the sub MEO and super LEO tethers will be more expensive. This is a possible show stopper.

Sending mass from LEO to a lunar height apogee saps our tethers' orbital momentum. The momentum hit is somewhere around payload mass * 4 km/s. Orbital momentum can be restored gradually with ion thrusters. Hall Thrusters can expel xenon with a 30 km/s exhaust velocity.

Plugging these numbers into the rocket equation:

About 1/8. So to make up for the momentum lost throwing 7 tonnes of payload, we'd need a tonne of xenon. Better than chemical but still expensive.

Lunar or NEA propellent as a source of up momentum.

Some Near Earth Asteroids (NEAs) can be parked in lunar orbit for as little as .2 km/s. Carbonaceous asteroids can be up to 40% water by mass (in the form of hydrated clays). There may be rich water ice deposits in the lunar cold traps. So far as I know, these are the most accessible potential sources of extra terrestrial propellent.

Catching propellent from higher orbits would boost a tether's momentum. Dropping this payload to a lower tether would also boost momentum.

Thus up momentum can be traded for down momentum. Xenon reaction mass to maintain tether orbits can be cut drastically with two way traffic.

Jon Goff has pointed out it take some delta V to get propellent from the moon's surface to LEO. Thus only ~10% of propellent mined lunar cold traps would make it LEO. See his blog post The Slings And Arrows of Outrageous Lunar Transportation Schemes Part-1 Gear ratios.

Using propellent as a source of tether up momentum I believe it's plausible for 40% of the lunar propellent to make it to LEO. In which case it becomes plausible to use reaction mass to mitigate the extreme conditions of re-entry.

The human race is a genie in a bottle. Given Tsiolkovsky's rocket equation, it's enormously difficult to cross the boundaries that confine us. But given infrastructure and resources at our disposal, we can build bridges to larger frontiers.

Given low tether ratios its easier to substutute some of the strenght to add conductive wiring, and use electrodynamic reboost. To save on fuel.

Also, multiple times you have stressed the requirement for anchor mass but never added it to the tether specification. I used to think the tether to payload ratio was including the anchor.

Rok, given the safety factor of 3 and low tether to payload mass ratios, maybe you are correct and conductive copper wiring can run the length of the tether. This would would remove the requirement of an elevator car to have its own power source. I haven't constructed a model. One of the things I'd need to know is how thick the copper wire would need to be to conduct sufficient juice.

That was the unanswered question, how much anchor mass for Super LEO tether?

Let's say the Zylon tether plus anchor mass outmass payload by a factor of 10. Catching and throwing the payload would slow the tether by .1 km/s which would drop tether perigee by about 550 km. The tether would still be well above the LEO satellites and debris but I'm not sure what being in an elliptical orbit would do to the vertical tether. It might induce oscillations.

Let's say Zylon tether plus anchor outmasses payload by a factor of 20. Tether anchor speed would be changed by .05 km/s. Perigee would be lowered by about 275 kilometers. A 9294 km radius by 9019 km radius ellipse would have an eccentricity of .015, in other words pretty close to circular.

So my guess is the anchor mass would need to be greater than payload mass by a factor of 20.

The anchor mass could have lots of useful stuff in it. Solar arrays, hall thrusters, xenon. A water cracking plant to change imported ice to hydrogen/oxygen bipropellent. Given the SLS or Falcon HLV, it would be possible to put the anchor mass in place. But the present market doesn't justify this sort of investment.

Well the are about 400t of equipment, aluminum and solar panels in about 400km orbit. Needs about 1kms to increase its orbit to 2600km.

A better use for ISS than the ocean.

If you had a lunar base and your business model was residence, tourism, broadcasting, and space construction there, it would make sense to lift the anchor masses from the Moon. It would take a while, so the more often you could send a load up, the sooner you would have your network of tethers.

In the ideal world for space exploration where i choose to do my project, i'd put nuclear engines on the tether anchors orbiting the Moon, so they could reboost the anchor quickly, and though they aren't nearly as efficient as ion drives, at least they only need water and a small plant cracking it into LOX and H2 for them. Also, maybe if their development path proceeded the way James Dewar talks about, their Isp could be boosted a lot further with time, into the thousands.

Or maybe Paddy Neumann's drives will pan out and magnesium can be sent up from the surface and used for boosting. Can i put links in this? http://neumannspace.com/blog/fuel-of-the-week-magnesium/

Each of those tethers could host a space station - except the GEO one would need to be longer so the central anchor mass isn't in the Van Allen belt. Since you already have to put lots of mass there, you might as well. Then they are economic forces in themselves, not just passive chunks of mass. For every kilo that goes to the Moon, you might as well send a kilo back to those tethers, and then some. It becomes a virtuous cycle, the more mass you send, the more mass you can send, so just keep going. And the more shielding you have for your space stations.

Rok, if I remember right, the I.S.S. has a healthy inclination. So it'd take a lot of delta V to get it in an equatorial orbit.

All the dead sats in equatorial orbits just above geosynch encourage the Super Geo tether to be equatorial. And to hand off payloads with minimal delta V, the tethers should be coplanar.

I've been told satellite and debris data bases may soon have the option to sort by inclination. That way it would be easy to find all the sats with 0º inclination. I know there's a bunch above GEO. I imagine there's a few in LEO also, but I don't know how many. Most of the dead LEO sats are presently de orbited but it might be an option to send them upward to serve as tether anchor mass.

In a vacuum, you could get away with calcium as a conductor. It conducts better than aluminium or copper but it's pretty weak. Beamed power is probably still the best way to go. Has anybody ever discussed a pulley system or funicular of some sort? Never seen that in the literature.