In Phobos - Panama Canal of the Inner Solar System, Doug Plata had asked about tether catches:

How much time would one have to attach to the tether's end? Since it is connecting two different orbits then I'm imagining that it would be fairly brief. If one misses the connection, then what?


I liken a catch at apoapsis to catching a ball at the top of it's bounce. For a brief time, the ball hangs motionless -- and then gravity pulls it back down. The less the acceleration, the longer the ball will hover at the top of a toss.

For an example I will use the ellipse common to the Phobos and Deimos tether: 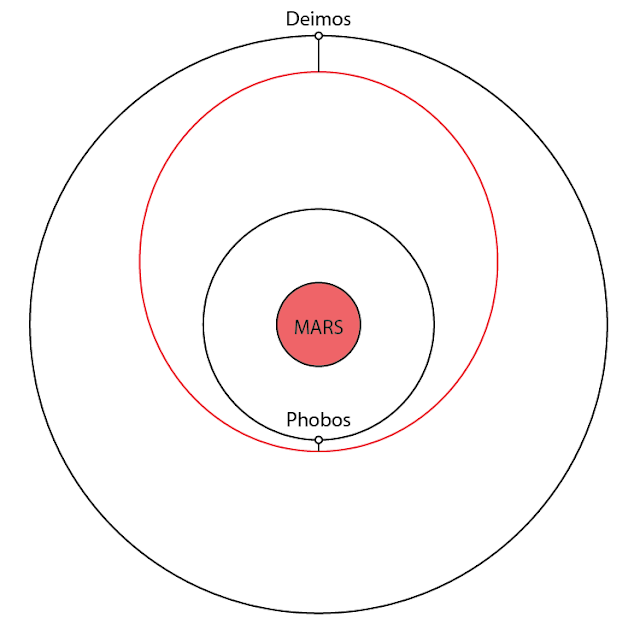 The larger red ellipse is the path a payload would follow dropped from the foot of the Deimos tether and/or if thrown from the top of the Phobos tether. At peri and apoapsis, this path matches the speed of the tether. So the moons could exchange payloads while using virtually zero reaction mass.

Note: When I use directional words like top, foot, above, below, up or down, I'm using Mars as the center. Down means Marsward.

Making the catch at the Deimos tether foot

Both the payload and Deimos tether foot are traveling about 1.18 km/s. But it is the relative velocity that counts. After all, I am traveling 30 km/s as earth circles the sun and so is my computer monitor. Do I worry about a catastrophic collision with my computer monitor? Not since I'm moving about zero km/s with regard to my computer.

Catching at the foot of the Deimos tether:

30 minutes before the catch the payload is trailing the foot by a few kilometers and is about 55 kilometers below. It's traveling about 136 miles per hour with regard to the tether, most of that velocity is vertical.

1 minute before the catch, the relative speed is only about 5 mph.

I'll compare this to driving a car. Driving down the road at a leisurely 30 mph, I step on the brakes. I don't stomp on them, mind you. Just decelerating at my usual careful pace, it takes 6 seconds to come to a full stop. Now look at the payload 5 minutes before the catch: 22.6 mph. Compared to my Sunday driving, this payload is moving like a turtle coming out of hibernation. 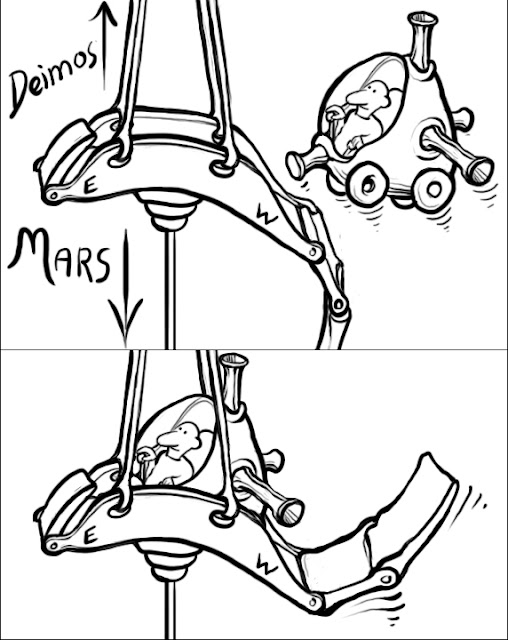 In this cartoon I have a quadpod on wheels entering on the west end of the ramp. The wheels are only partially for comic relief. Wheels would actually be helpful landing on a platform.

The quadpod is a fanciful design not really relevant to tethers. I use it because it can quickly make slight adjustments to speed along any direction. The closing velocity is almost completely vertical. There will be a time when the space ship is quite close to the tether and falling up at a high speed. So it would be good to be able to do a slight tap on the brakes or gas pedal.

Also to give a little error room to the landing on the west ramp, I imagine a folding west end of the ramp that can extend itself after the ship has matched altitudes.

At this part of the Deimos tether, centrifugal acceleration is -.0681 m/s2 and Mars gravity is .1017 m/s2. Net acceleration is .034 m/22. A Sumo wrestler weighing 400 pounds on earth's surface would weigh 1.4 pounds. A coin falling out of your coat pocket would take ~8 seconds to reach your foot (assuming distance from coat pocket to foot is one meter).

Making the drop to Phobos

To send a payload on it's way to Phobos, simply roll of the east edge of the ramp.

Making the catch at the Phobos tether top

Catching at the Phobos tether:

1 minute out, the tether is moving 18 mph. A faster pace than the Deimos tether catch, but still much more leisurely than me rolling my car into the driveway from a Sunday drive.

At this part of the Phobos tether, centrifugal acceleration is -.536 m/s2 and Mars gravity is .4027 m/s2. Net acceleration is -.133 m/22. A Sumo wrestler weighing 400 pounds on earth's surface would weigh -5.44 pounds.  A coin falling out of your coat pocket would take 4 seconds to reach your foot (assuming distance from coat pocket to foot is one meter).

From the point of view of someone on Mars, the acceleration would seem upward. Looking through a telescope, they'd see the Sumo wrestler bumping against the ceiling like a helium balloon. 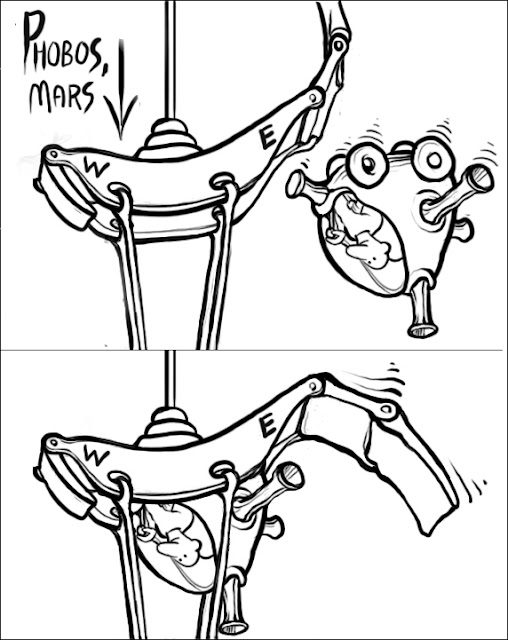 Making the drop to Phobos

To send a payload on it's way to Deimos, simply roll of the west edge of the ramp.

Some general rules for vertical tethers 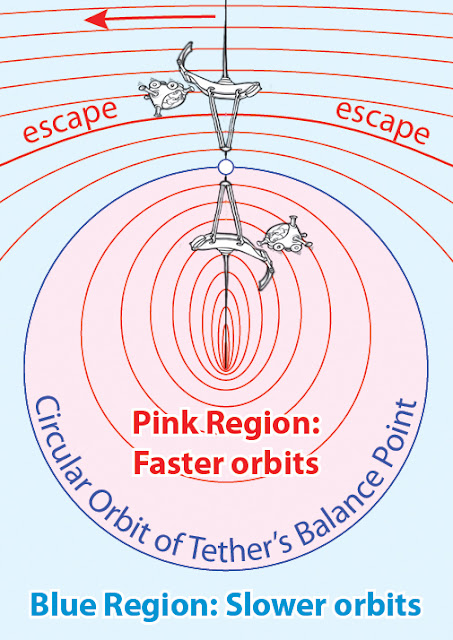 This is an illustration for any vertical tether in a circular orbit. It also applies to Clarke style beanstalks.

The red orbits below the circular balance point's orbit move faster than the tether except where they cross the tether. At crossing points the orbits move the same speed as the tether. I explain here how tether matching orbits are found.

For points on the tether above the balance point's circular orbit, entrance/catching ramp are on the leading edge of the tether. To throw to high orbits, roll off the trailing edge.

Things are less relaxed as the tether extends further from the balance point. As soon as I have time, I will look at a Phobos tether whose foot extends into Mars upper atmosphere. The net acceleration at this foot would be about 3 km/s2 or about a third of an earth g.

Let's say that the end of one tether has a Canadarm of 15 meters in length. How much time would the end of the other tether be within the reach of the Canadarm? Is this the right way of thinking about it? You liken it to docking at the ISS. In that situation the Canadarm has what, 20 minutes or so amount of time to grab a ship? Is that really an analogous situation?

Doug, It's only I.S.S.-like near the balance point where there's zero net acceleration. In the above example that'd be in the regions of Phobos or Demos' L1 and L2 points. After matching velocities, the ship would hang around and the robotic arm could grab it at it's leisure

In other regions of the tether there is a net acceleration and rendezvous is not like docking with the I.S.S.. It is more akin to landing on a platform.

Given the stated velocity differences, wouldn't it be possible to extend the duration of the docking window by putting the docking mechanism onto a moving climber on the tether, to match height with the approaching vehicle? And/or by using a moving ballast-mass climber (above or below) to induce a controlled coriolis effect in the tether, to help match horizontal velocity differences, and potentially help damp them after docking?

Thrusters on the docking vehicle, would only need to make fine adjustments for the final connection to the docking node, which should now match velocity fairly closely. I would suggest that this type of docking would be more akin to an air-to-air refueling rendezvous. Or perhaps something like this.

I should think that, once in reasonable proximity, a docking connection could be achieved within a 5 minute window.

Magico, gravity and inertia takes care of matching velocity and position. When the craft arrives at the platform, touchdown is as soft as feather.

Some course adjustment would be needed since the moons' orbits are slightly inclined with regard to one another and the orbits are nearly but not perfectly circular.

Perhaps a movable platform would give the ship more room for error. Notice that I have also suggested a movable entrance ramp. But I believe enroute vehicle course adjustments wwould be easy to do.

Sorry, I was thinking ahead to the Mars suborbital to Phobos-tether bottom transfer, where the elliptical orbit will be tighter and less forgiving of any rendezvous mistiming or plain old miss.

Any vehicle ought to be able to use thrusters for adjustment, it's true. I was just spitballing, to see if there was a way to keep any propellant use to an absolute minimum, while still improving the rendezvous chances.

Magico, you're right about the suborbital catch to Phobos tether foot. It's way faster and feeling a healthy acceleration. I'm not even sure a landing platforum would be appropriate, but whatever the catching mechanism it should be mobile.

Maybe something along the lines of this video at 3:20 : https://www.youtube.com/watch?v=mPx1Nq80jm8

So, the video shows precious little time to make the catch and it assumes that the vehicle and the rotation of the tether matches very closely. In the video, if the capture had been missed, how likely would it be that the situation would be redeemed later?

Doug, the video is of a rotavator in earth orbit. I linked to it because it shows a mechanism for making fast paced catches.

The Phobos and Deimos elevators would be vertical tethers. For these timing is much less of an issue than with rotavators.

If a ship launched from Mars surface misses the tether foot, it could land downrange of the launch site.

For ships coming in from an interplanetary trip, I would be inclined to use the ships ion drive to put it in a highly elliptical orbit that rendevous with the outer tip of the Phobos or Deimos tether. That way a missed catch can be recovered days later.