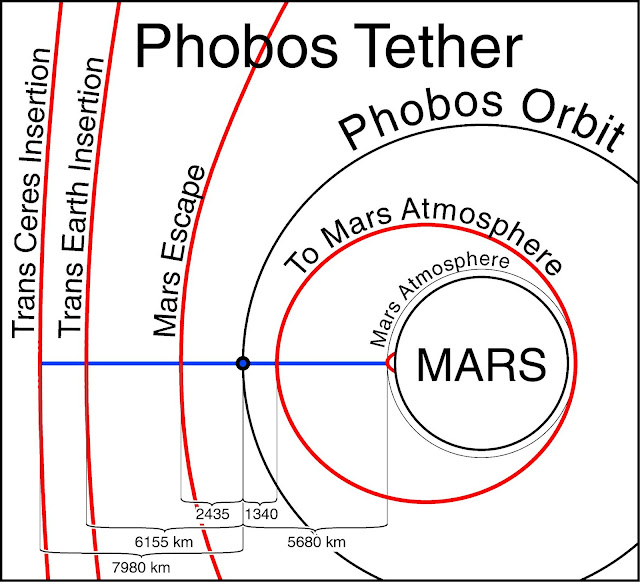 My post Orbital Momentum as a Commodity describes how a tether with a healthy anchor mass can catch and throw payloads. I tried to think of ways a tether might restore orbital momentum lost during a catch or throw. Two way traffic is one way to pay back borrowed momentum.

Well, Mars' moon Phobos masses 1.066e16 kg. With this huge momentum bank, catching and throwing payloads would have less effect than a gnat hitching a ride on a Mack truck. A Phobos anchored tether could catch and throw for millennia with little effect on Phobos' orbit.

The tether illustrated above doesn't suffer the enormous stress of a full blown earth elevator or even a Mars elevator. It could be made from Kevlar with a taper ratio of about 11.

The tether foot pictured above moves about .6 km/s with regard to Mars surface. This is about 1/10 of the ~6 km/s the typical lander from earth needs to shed. Mars Entry Descent and Landing (EDL) would be vastly less difficult.

Some have suggested Phobos 1.88 g/cm3 density indicates volatile ices. If so, the moon could also be used as a source of propellent. A Phobos propellent source would make EDL even less of a problem. However Phobos' low density might also be due to voids within a rubble pile.

On page 2 of the Acceleration of the Human Exploration of The Solar System with Space Elevators Marshall Eubanks takes a look at how the foot of Phobos-Anchored Martian Space Elevator (PAMSE) might interact with Mars' atmosphere:


The orbital eccentricity of Phobos amounts to 283 km, which is by coincidence comparable to the effective depth of the Martian atmosphere for satellite drag (typically ~ 170 km, but subject to variations due to atmospheric events such as dust storms). The average relative velocity between the lower tip and the surface of Mars is only 534 m/sec, roughly Mach 2 in the cold Martian atmosphere, and slow enough that it should not cause significant heating of the tip. This raises the interesting possibility that the PASME tip could dip down deep into the atmosphere to leave or recover payloads or perform reconnaissance, acting as a supersonic airplane for the period near periapse when it is near the surface.

Eubanks' 534 m/sec is a little slower than the .6 km/s of my tether tip. This might be because I had placed my tether tip 300 km/s above Mars' surface thinking atmospheric friction would destroy a lower tether foot. Eubanks' analysis has changed my view.


The orbit of Phobos is equatorial, and there is a big mountain in the way, Pavonis Mons, the middle of the Tharsis volcanoes, straddling the equator and by far the highest obstacle in the path of the elevator tip. Maybe a railroad on top of the volcano could match speeds with the elevator tip, once every 3 days or so (when the orbit and volcano aligned). If so, you would have up to 3 minutes to shift cargo on and off.


…the cool thing is that the tip can be something like a tethered airplane (with wings and flaps, etc.) and you should be able to use that to control oscillations. I was hoping to get money to begin actually "testing" this (i. e. in simulation), but, alas, not so far.

Remember, too, with the PAMSE the counterweight has ~ infinite mass, and so any oscillations have to end there. (of course, anchoring a PAMSE in Phobos is left as an exercise for the reader.)

If Phobos is indeed a loose rubble pile, anchoring the elevator would be difficult. So while Eubanks eased my anxieties on oscillations and atmospheric friction, he calls my attention to a problem I hadn't thought of.

6155 km above Phobos the tether is moving faster than escape velocity with a Vinf of 2.65 km/s. This is sufficient to toss a payload down to a 1 A.U. perihelion. This could provide most of the delta V for Trans Earth Insertion.

A ship coming from Earth would have a Vinf of 2.65 km/s and so rendezvous with this part of the tether might be accomplished with little propellent.

7980 km above Phobos the elevator is moving with a Vinf of 3.27 km/s, enough to hurl payloads to a 2.77 A.U. aphelion. This part of the tether might send/receive payloads to/from the Main Belt. There are a lot of asteroids with healthy inclination, though. So there would be substantial plane change expense at times.

One thing about the Main Belt, the pace is much more leisurely. Ceres moves about 1º every 5 days. In contrast earth moves about 1º a day and a satellite in low earth orbit moves about 4º a minute.

So a month-long, low-thrust ion burn over there looks a lot more like an impulsive burn than it does in our neck of the woods. I believe high ISP ion engines are well suited for travel about the Main Belt.

The inert gas argon can be used as reaction mass for ion thrusters. Mars' atmosphere is about 2% argon. It is also about 2% nitrogen and 96% carbon dioxide with traces of oxygen and water. Mars also has respectable slabs of water ice at the poles.

Mars would be a good source of propellent for the entire belt as well as CHON for the volatile poor asteroids in the inner main belt.

For example the balance point for a Ceres elevator would only be 706 km above Ceres surface, that is the altitude of a Ceres-synchronous orbit. To provide enough tension to remain erect, the elevator would need to extend to an altitude of 2000 km. At 2000 km, the tether tip is moving about .46 km/s, a good fraction of the 2.82 km/s needed fro Trans Mars insertion. If this Ceres elevator is Kevlar, taper ratio would be about 1.02.

If extended to an altitude of 14,500 km, the Ceres elevator top would be moving fast enough for Trans Mars insertion. This would require a taper ratio of around 5 for a Kevlar tether. 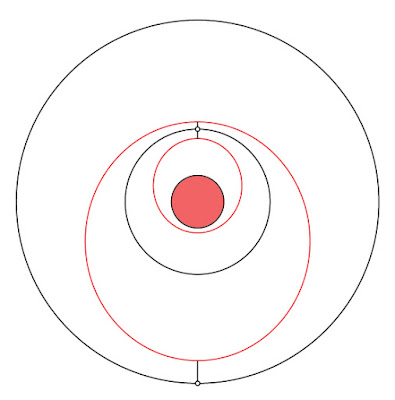 Pictured above a Deimos tether drops a payload to a Phobos tether.

After descending the Phobos tether, the payload can be dropped to a Mars atmosphere grazing orbit.

These tethers are a lot shorter than 14,000 km tether we were talking about and taper ratio is close to 1.

No Moons to Dodge

A full blown Mars elevator capable of throwing payloads to the Main Belt or even earthward would have to dodge Deimos as well as Phobos.

A Phobos elevator for flinging payloads to Ceres ends well below Deimos' orbit. And of course a Phobos anchored tether doesn't need to dodge Phobos.

Tsiolkovsky's rocket equation and big delta V budgets are touted as show stoppers for routine travel to Mars' surface or the Main Belt.

Has anyone ever demonstrated a tether capture in a 0-G environment? I have always found it difficult imagining this being done reliably.

Doug, rendezvous in microgravity has been done many times. For example the docking with the I.S.S. I believe rendezvous with the low g parts of the tether would be the least challenging.

Above the Mars Phobos L2, centrifugal force exceeds gravity. There's a net acceleration away from Mars.

Where there's substantial acceleration, rendezvous could be landing on a platform. But much less challenging than landing on Just Read The Instructions floating platform. Closing velocity would be zero rather than terminal velocity in earth's troposphere. Once velocity is matched, the space ship would need to hover to counteract the net acceleration until soft landing is accomplished. But the acceleration would be much less than earth's surface gravity.

Departure would simply be rolling off the edge of a platform.

Where there's less acceleration, rendezvous will more like I.S.S. docking.

At the region for Trans Ceres Insertion, net acceleration is .8 meters/sec^2, less than 1/10 of a g.

Maybe I'm misunderstanding. How much time would one have to attach to the tether's end? Since it is connecting two different orbits then I'm imagining that it would be fairly brief. If one misses the connection, then what?

Missing a catch would indeed be bad! Especially if the payload contains humans with life support for a limited time. I will try to think of ways risk might be reduced.

re: anchoring to Phobos...

I've seen concepts for harpoons and corkscrews, but those seem massive and unreliable. Instead, consider this:

Use a semirigid 'spine' with a series of inflatable rings (similar to lift bags) which can be moved along the spine. The device moves much like a snake, navigating a path between boulders and taking advantage of small voids by inflating bags to form temporary 'footholds', using those holds as leverage to thrust the spine forward. The repeated action of the bags compresses the surrounding material and forms a rough tunnel. The device pulls along a length of cable for power supply and as payload.
Its primary purpose is to deploy a deep anchor. At sufficient depth the device deploys a large airbag attached to the end of the cable. The hold-down force of, say, a 10-meter sphere a few hundred meters under the surface will be vastly superior to a 10-meter harpoon and most likely much lighter. The device could carry a few larger, detachable toroidal bags to provide multiple anchor points. Initial burrowing under the regolith could be by corkscrew or paddles, or the device could be fed into a pilot hole for simplicity. To avoid loss of holding power, the anchor bags could be pumped full of expanding foam; in the event of a puncture the foam would expand into nearby voids and maintain hold. A simpler solution would be to fill them with water and let it freeze.

This basic framework would allow reliable, reusable tunneling and anchor deployment without needing heavy materials or high impact speeds. Additional features could be added such as heat/microwaves/lasers for volatile extraction or wall sintering, magnetic rakes for catching nickel-iron nodules, or simply building the device large enough to bore a 10-20 meter dia. tunnel and drop habitat modules straight in. The individual segments would be identical for ease of production and maintenance and could even snap themselves together. Groups of segments could detach and split off, allowing multiple anchors to be placed in one dig as a cluster at depth.

We already have 'snake-bot' rescue robots capable of investigating rubble piles and collapsed buildings on Earth, so the basic concept has at least some level of existing technology. Operation in microgravity is a drastically different environment but I believe this could be a more reliable and effective concept than hammer drills and corkscrews.

As applied to a Phobos-anchored tether, I think it is feasible to expand a tunnel directly through Phobos along the proper axis. This would give you a roughly 25 kilometer 'core sample', plenty of bearing surface for handling reaction loads coming from the tether, radiation-protected area for crew, enough space to reel in and reel out the whole tether for inspection or repairs and conceivably even enough space for a manufacturing facility to make the tether on-site from hydroponic outputs.

In an ideal tether capture the relative velocity is asymptotically zero, and spacecraft acceleration zero approaching the tether. Given the catcher is on a very well characterized path the only really tricky part I see (baring a guidance or propulsion malfunction on the spacecraft) is hitting the right approach path at the right time to be intercepted by the catcher. The spacecraft needs to hit a specific position and velocity at a specific time. Fortunately the equations of motion to be solved are well defined.

How does the negative electric potential of Phobos impact on the tether?
https://www.youtube.com/embed/R7q0vv0x7lA