It seems like every other post I'm singing the praises of EML2. I'm also enthusiastic about L1 and L2 necks for big moons orbiting gas giants.

I've no idea why you think there's some essential difference between e.g. transfers between moons in the Jupiter system and transfer between planets around the sun. Mathematically it's the same situation, multiple masses around a central planet or sun. Obviously the moons of Jupiter are larger compared with Jupiter than planets are compared to the sun, and the orbits are far shorter. But they still have Hohmann transfer orbits, and hill spheres, and lagrange points, and these tubes, which lead out from the lagrange points. 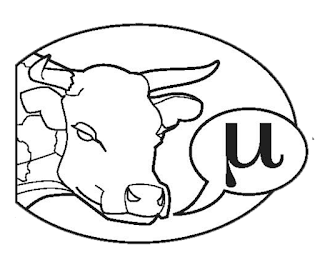 The big reason is mass parameter. This quantity is often denoted μ in discussion of 3 body mechanics. 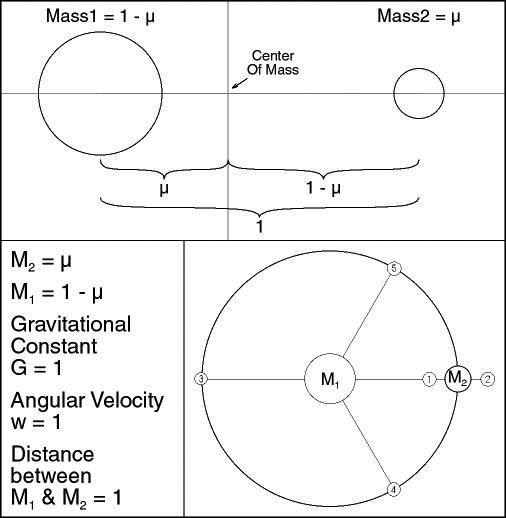 It's common to choose units so that mass of central and orbiting body sum to one.

The small the μ, the closer L1 and L2 get to the orbiting body.

What paths do payloads follow when nudged away from the orbiting body at L1 or L2? Well, we can notice a few things about L1 and L2:

The L1 and L2 have the same ω (angular velocity) as the orbiting body.

L1 and L2 are collinear with central and orbiting bodies.

It just so happens I have a diagram of collinear points all having the same ω. It's what I use to model vertical tethers. By scaling this diagram it could also be used to model space elevators. (Space elevators are a special case of vertical tether where the tether foot coincides with planet surface and circular orbit of the balancing point coincides with planet synchronous orbit): 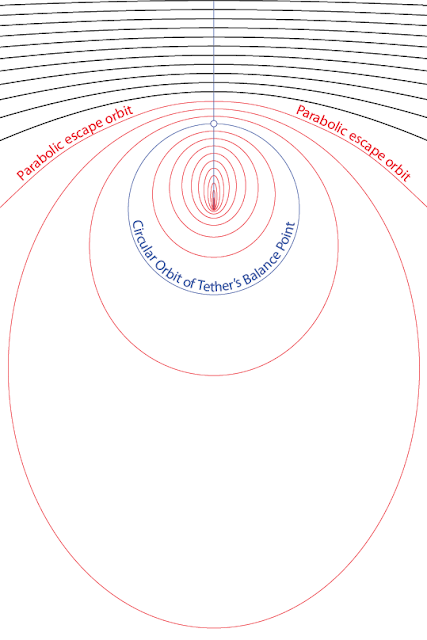 But this diagram was derived using 2 body mechanics. When nudged away from the orbiting body's Hill Sphere, the payload will quickly enter a regions where the central body gravity dominates and conic sections are fairly accurate.

But while in the neighborhood of the Hill Sphere, there's a short interval when the path should be modeled using both the accelerations of central and orbiting body: 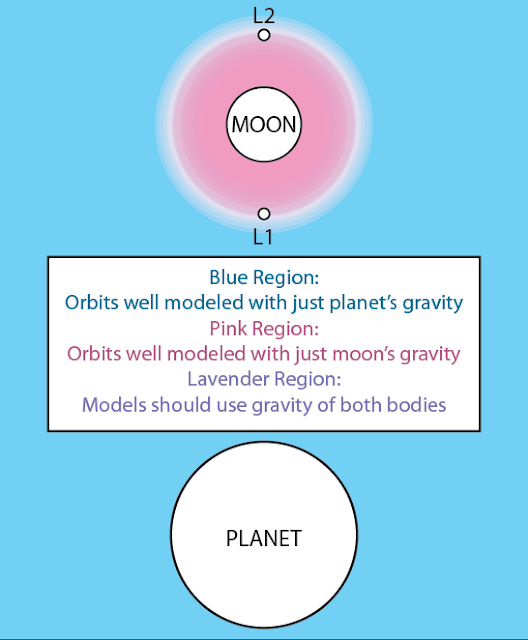 While falling away from the moon near L1,  a payload surges ahead while the moon tugs it backwards and a little up. This has the effect of lowering the apo and periapsis as well as rotating line of apsides in a prograde direction. A payload nudged from L2 away from the moon will lag behind the moon. While in the lavender region, the moon pulls the L2 payload forward boosting peri and apo-apsis as well as rotating line of apsides forward. L2 necks throw higher and L2 drops lower than corresponding points from a vertical tether.

Here are orbital sims for various mass parameters where colored pellets are nudged with slightly different velocities from L1 and L2: 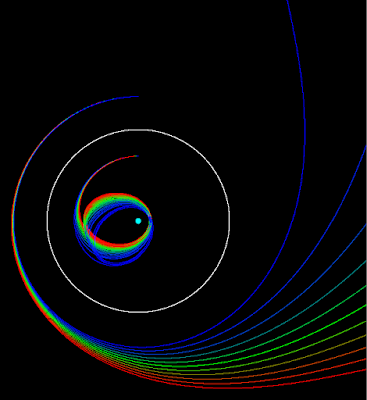 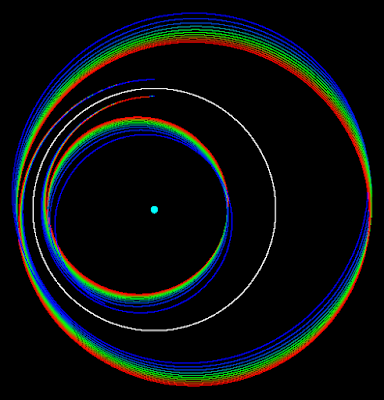 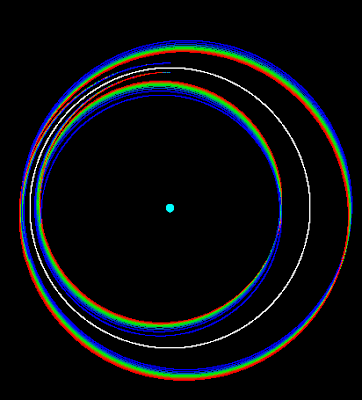 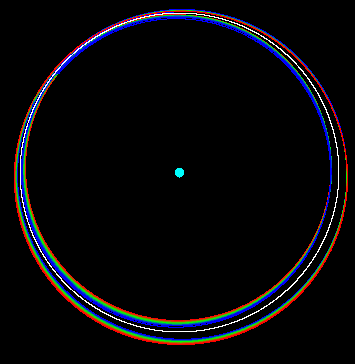 Notice as μ shrinks, the orbits get closer and closer to what the tether model would suggest. For μ = .000001, apogee is very close to point of release and eccentricity of ellipses is approaching |1 - r3|. As the Hill Sphere shrinks the lavender two body zone gets thinner and the 2 body model becomes increasingly accurate.

What About Gravity Assists? Just Look At Rosetta

"Well sure, nudging a payload from SEL2 doesn't get us much past a 1.07 A.U. aphelion" an ITN defender replies. "But earth gravity assists can boost that aphelion. Look at Rosetta's March 2005 gravity assist -- it boosted an earth like orbit to an aphelion past Mars."

So let's look at the Rosetta gravity assist. 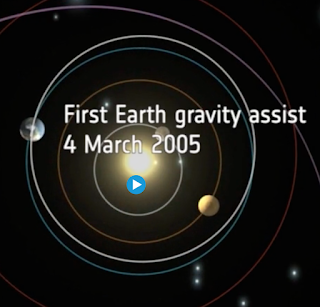 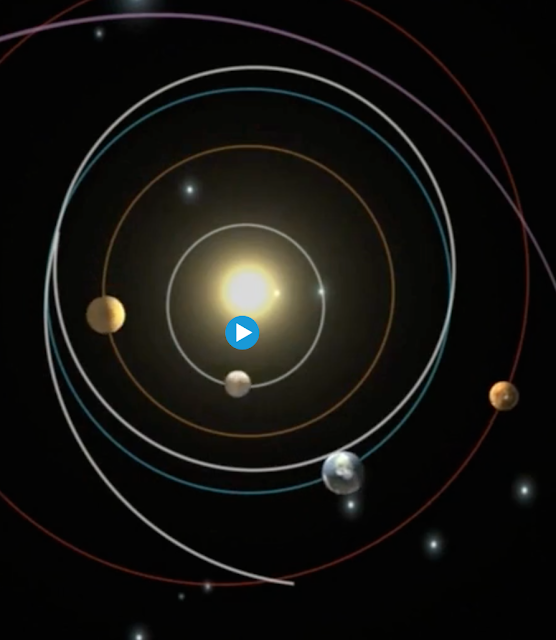 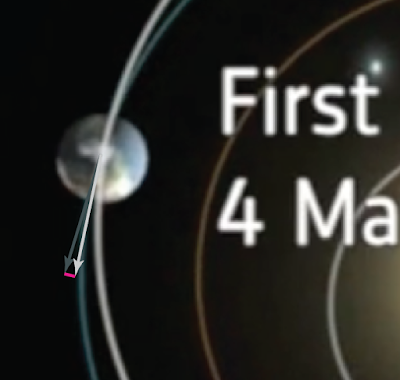 In contrast, Vinf of an orbit departing from SEL1 or 2 will be about .3 km/s. Rosetta's initial orbit couldn't be accomplished via a WSB from an L1 or L2 neck.

Further, a payload from SEL2 remains outside earth's orbit, it does not cross. The closest it comes it .01 A.U. during which time it's flight path is zero. The same is true of an orbit nudged from SEL1: 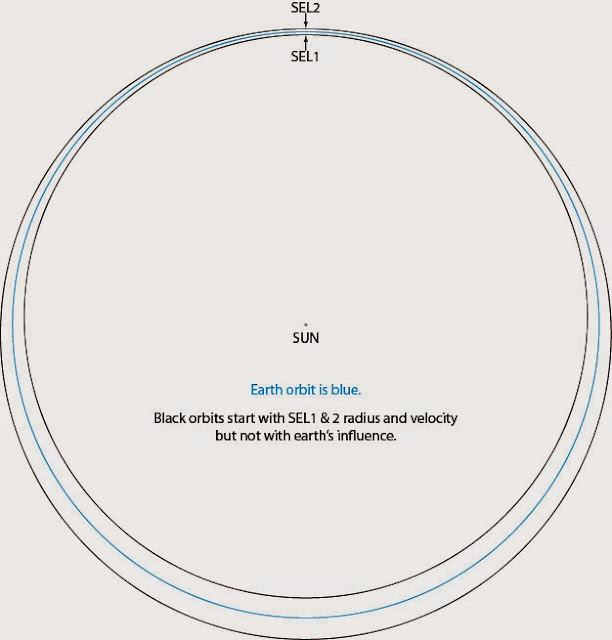 Another thing to consider is synodic period. A way to think of synodic period is how often one runner laps another as they race about a circular track. If both runners are going nearly the same speed, it will take a long time.

When the payload finally does lap the earth 19.88 years later, it will be 43º from perihelion. 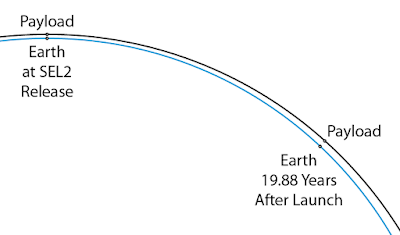 The tinier the μ, the bigger the synodic periods of payloads released from L1 and L2 necks.

Synodic Period with a big μ

In closing I'll take a look at synodic period of something dropped with from Earth Moon L1. When it comes to μ's the earth moon's .012 is the 900 pound gorilla of the solar system. It's the biggest I know of except for Pluto Charon's .104. 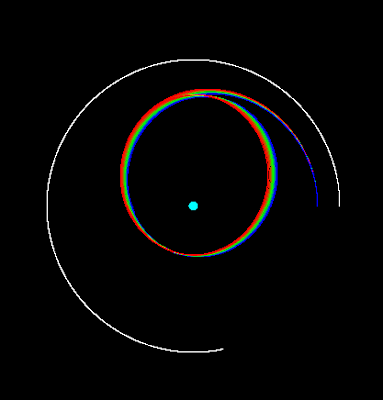 Period is about 11 days. Synodic period is 20 days. So within a month's time these pellets will fly by the moon when they're near apogee: 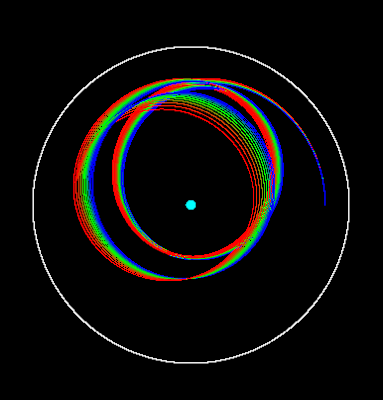 EML1 and EML2 can do lots of stuff within a fairly short time. I have seen some crazy stuff running earth moon sims.

But zoom out and it gets boring. I've let sun earth sims run for centuries without seeing any drama. The L1 and L2 necks for the sun/rocky planets are a bunch of duds.

Here are a few mass parameters for central and orbiting bodies:

I hope I'll some time to play with the Pluto/Charon 3 body system. I believe there are some wonderful possibilities in this setting.

Does the ITN include Gravity Assists?

Given big enough  μ's, some WSBs can snake by another body which can lend a gravity assist.

Does that mean gravity assists are part of the ITN? No. We've been using gravity assists for many decades. They were in common use before Ross' or Belbruno's techniques came on the scene.

Some claim astrogators are now using Belbruno's or Ross' techniques to find opportunities for gravity assists. I haven't seen any evidence of this. So far as I can tell mission planners are still finding such opportunities the old fashioned way: looking for needles in a hay stack. In other words with persistence and hard work.